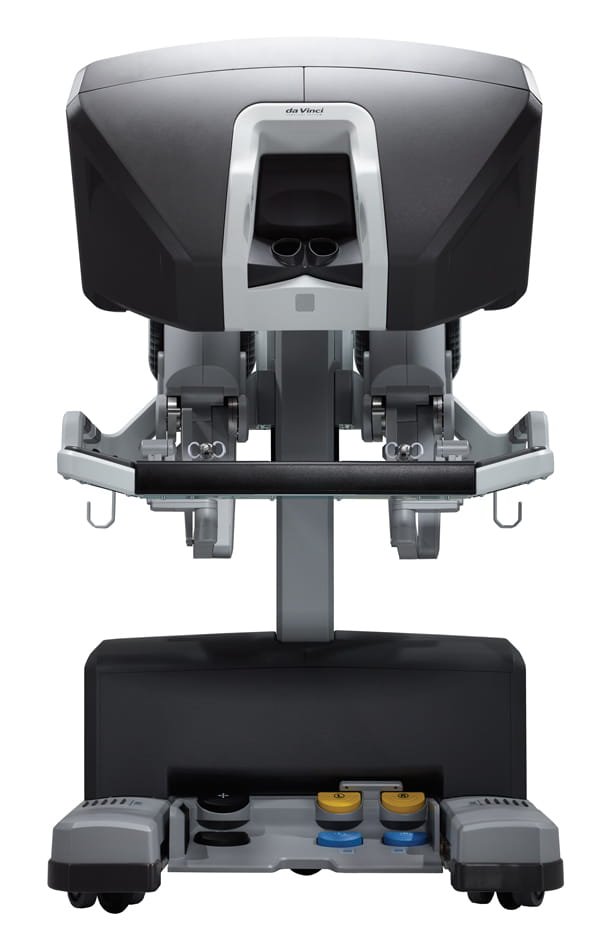 MUSC offers robotically assisted procedures in many areas, including the duodenal switch, mitral valve repair and now the DIEP flap. “These are procedures offered by very few centers in the country, and certainly we are the only center in the state doing these procedures,” said MUSC Health cardiothoracic surgeon Marc R. Katz, M.D.

The da Vinci SI System available at MUSC Health provides high-definition 3D visualization of the valve and has wristed robotic arms that are capable of greater dexterity than human hands. “The robot does what the surgeon’s hands do,” says Katz. “It translates the normal motions of the surgeon’s hands in through tiny incisions.”

Mitral valves can be repaired instead of replaced

Katz has more than 15 years of experience with the da Vinci robotic system. He had the third robot in the U.S., was an investigator on the clinical trials that led to its approval and has been engaged in each of its developmental iterations.

He is now able to repair leaking mitral valves before patients have heart failure. He is the first to offer robotic mitral valve surgery, the least invasive of all mitral valve repair techniques, to patients in South Carolina. In appropriately selected patients, and when performed at high-volume centers such as the MUSC Health Heart & Vascular Center by surgeons experienced in the technique, robotic mitral valve repairs achieve results at least as good as those attained by other minimally invasive techniques or via open surgery – but with less pain, a shorter hospital stay, a quicker recovery, and a more rapid resumption of normal activities.

“Patients return to work when they feel like it after robotic repair,” explains Katz. “For most, that’s within a week or two instead of the eight to 12 weeks required after open heart surgery.”

For robotic mitral valve surgery, the surgeon makes several small ports — approximately half an inch long — into which the robot’s arms are docked and a small camera is inserted. “The scope is sitting right next to the valve and so the valve looks like it is ten feet tall,” says Katz. “Due to that better visualization of the valve, we can achieve excellent mitral valve results.”

As the mitral valve degenerates, the seal becomes leaky, leading to backflow of blood into the atrium.

Backflow may reduce both the supply of oxygenated blood to the body’s organs, causing shortness of breath and other symptoms, and result in a backup of fluid in the pulmonary vessels, which can lead to pulmonary hypertension. The resulting stresses on the heart can cause congestive heart failure.

In the past, the mitral valve was replaced with a prosthetic and surgery was reserved largely for those who had already developed congestive heart failure. Over 90 percent of degenerative mitral valves are suitable for repair, and better short- and long-term results are achieved with repair than with replacement. Unlike replacement, repair does not require long-term anticoagulation.

Chitharanjan Pullattrana, M.D., and plastic surgeon Kevin Delaney, M.D., have joined forces to do robotically assisted breast reconstruction in what is one of the first procedures of its kind in the nation.

Delaney proposed an innovative idea to try a less invasive way to perform the DIEP, or deep inferior epigastric artery perforator flap. The DIEP flap is a technique in which skin, vessels and tissue are taken from the stomach to recreate the breast following a mastectomy.

In this procedure, fat and skin tissue from above the patient’s belly muscles has already been harvested. Delaney works above and Pullattrana works below the abdominal muscle, hooking the blood vessels needed to support a transplant of tissue to the patient’s breast. Plastic surgeon Jason Ulm has already prepared the breast site to receive the flap while Delaney and his team do the abdominal incisions.

In addition to the robotics surgical unit, the surgeons used a fluorescence imaging system that allows them to visualize microvascular blood flow and perfusion in tissue as they operate.

This procedure allowed for a small cut in the abdomen about the size of a quarter, versus the former method, which would have meant an eight-inch cut into muscle and fascia.

The patient said she is fine being among the first in the nation to have the procedure done robotically because she trusted her doctors and was able to go home after only three days.

Laparoscopy should be the bedrock of surgeons’ training, and the great majority of the cases that are done in general — GI, surgical oncology — can be done well laparoscopically, Pullattrana says. “In tight spaces and when the patient is obese, the robot enables us to do these challenging procedures in a minimally invasive fashion with less fatigue and greater dexterity for the surgeon, both of which help the patient.”