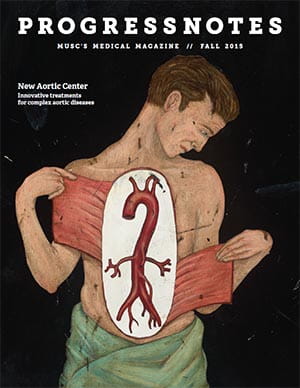 Coming to a Screen Near You

Each year in the U.S., one in four adults experiences mental health issues, only 60 percent of whom receive treatment. One in five teens (13-18 years) and more than one in 10 children (8-15 years) experience severe mental illness, but almost half of those aged 8-15 years with a mental illness receive no treatment. Common barriers to treatment include stigma, lack of insurance, and limited availability of providers.

Medication adherence is much poorer and hospital readmission rates much higher in patients with untreated mental health issues. Increased access to behavioral services must figure in any attempt at improving population health. Indeed, expanding access to mental health services is a central tenet of the Affordable Care Act, which advocates both better integration of behavioral medicine into primary care practices and the growth of school-based health centers to extend mental health services out into the community.

In rural states such as South Carolina, most mental health providers are clustered in major urban areas, making it necessary for rural residents in need of those services to travel long distances for care, incurring transportation and child care costs and days lost from work.

Primary care offices are being asked to serve as medical homes for their patients and to integrate specialty services such as behavioral medicine into the practice. The million dollar question is, of course, how to achieve such integrated care. Telehealth may offer a solution. A recent article in Lancet Psychiatry by researchers at MUSC Health and the Ralph H Johnson Veterans Affairs Medical Center reported the results of a study showing that mental health services provided via telehealth are as good as those provided in person.1

Practices affiliated with MUSC Health’s VTC can refer patients with mental health issues for evaluation and medication management to Gwynette, who is board-certified in both psychiatry and child and adolescent psychiatry. The patient meets with Gwynette via HIPAA-compliant, secure two-way video conferencing, and then Gwynette pauses the session to contact the primary care physician (PCP) to discuss the case and his recommendations. Once the two have reached consensus, Gwynette reconnects to the patient and explains the treatment plan. “I’ve been really jazzed about the ability to talk to the PCPs in real time and I love being able to tell patients that I just talked to their doctors,” says Gwynette. “Their eyes say this is how it is supposed to be.”

Gwynette has received almost 200 referrals through the program since it began in November 2014. Two of the highest users of the service are James Simmons, M.D., of All Children’s Pediatrics, which serves patients in the Beaufort, SC area, and Sarah Allen, M.D., of Waccamaw Community Care in Myrtle Beach.

“My philosophy is that if medicine is going someplace we would like to get there first,” says Simmons. “Telehealth is where medicine is going.” Simmons, who prides himself on running a progressive and technology-friendly practice, was quick to see how the VTC could benefit his practice. “Telehealth makes it easy for my patients,” says Simmons. “They can see a lot more specialists.”

Patients and their families have been very appreciative of easy access to mental health services. “We had a young man just the other day whose Mom came in and told me he had done extraordinarily well since Gwynette has been able to modify his medications,” says Simmons. He is attempting to expand screening for mental health issues, such as teenage and postpartum depression, and appreciates the opportunity to confer with Gwynette about patients identified as having a mental health issue. “We can pick his brain if we need to."

Allen, who is an MUSC alumnus, has been offering services through the VTC since April and is particularly excited to be able to offer telemental health. “The wait time up in the Grand Strand area for a psychiatrist is months,” says Allen. “For someone with a mental health issue, that wait time is huge and really unacceptable.” Through the VTC, she is able to schedule patients for a visit with Gwynette within a couple of weeks. “The access is unbelievable,” says Allen.

She also believes that providing specialty care such as mental health services via telehealth leads to truly integrated care and a much better experience for the patient. “At MUSC I was part of a team, but in the community I am really on my own,” says Allen. “For me to be able to talk to a psychiatrist in real time and have him say ‘I think you are on the right track, here is something else I would consider, and I am happy to see your patient again to follow up and see if the changes we have implemented are working,’ that’s such a blessing.”

The VTC was founded in September 2012 by Samir M. Fakhry, M.D., Chief of the Division of General Surgery, with funds from a Duke Endowment grant. Since its inception, VTC has received 1172 referrals to its broad coalition of MUSC Health specialists (as of August 2015), saving patients 91,574 driving miles, 1831 travel hours, and $14,241 in fuel costs. Program coordinator Laura Langston provides training to practices and assists them with equipment setup. She has helped motivated practices get up and running in as few as six weeks. Those interested in affiliating with the VTC should contact Langston at langstl@musc.edu.

It is estimated that 20 percent to 25 percent of children and teens in the U.S. are affected by mental health issues, and yet only 36 percent of them receive treatment.2 This is unfortunate, because one-half of all chronic mental illnesses begin to manifest by age 14. If they go unnoticed in childhood, years may pass before they are diagnosed, delaying treatment that is more effective if begun early. Children with untreated mental illness do not perform as well academically; indeed, the National Alliance on Mental Illness (nami.org) estimates that 50 percent of students with emotional or behavior disorders drop out of school.

One answer could be providing mental health services to schools via telehealth. In 2015, MUSC Health was awarded a three-year $600,000 Duke Endowment grant (PIs: James T. McElligott, M.D.; Michael A. de Arellano, Ph.D.) to provide school-based telehealth and telemental health services to underserved South Carolina counties. Regan Stewart, PhD, is leading the mental health component of the project with the support of school-based telehealth nurse practitioner Kelli Garber, MSN, APRN, PPCNP-BC, and program manager Elana Wells, MPH. Its ultimate goal is to establish telehealth services in 15 schools in Williamsburg, Sumter, Charleston, and Bamberg counties and to create a sustainable model for continuing the project after funding ends. de Arellano will direct the efforts to establish telemental health programs in selected schools and to adapt evidence-based protocols for the management of mental health in adults to a pediatric population. Telehealth will be used both to triage patients in need of mental health services—deciding which ones are appropriate for outpatient therapy and which ones require a greater level of intervention—and to conduct therapy. On-site evidence-based mental health services can benefit students and improve the culture of a school, as de Arellano knows firsthand. Under the supervision of de Arellano and Cristina M. Lopez, Ph.D. of the College of Nursing, interns from MUSC have served as on-site counselors at R.B. Stall High School in North Charleston, providing trauma-focused cognitive behavioral therapy. Principal Kim Wilson admits that he underestimated the need for this program: “When Mike [de Arellano] first approached us with this, I was thinking this will be a great program but it probably won’t last. Within three weeks, we had a waiting list of kids and families who were needing this kind of attention.”

Currently, therapists are available five days a week, even through the summer. “I don’t see how we ever did without it,” says Wilson. He is convinced that the program played a role in graduation rates increasing from 48 percent to 65 percent: “I’m positive that some of the kids needing these services would never have stayed in school. Now they have a chance and the same hopes and dreams as other kids.”

As part of the Duke Endowment grant, de Arellano is hoping to provide on-site counselors “virtually” to selected schools in Williamsburg County. He has already provided such services to a high school in Florence County in a past collaboration with McElligott. He and his staff are currently meeting with school officials to determine their needs and hope to tailor programs to fit the needs of the selected schools. If the program proves successful and sustainable, he plans to expand it to schools without access to mental health services in other counties. “No matter where children are in South Carolina, they can have access to high-quality, evidence-based mental health treatment,” says de Arellano, describing his vision for the program.

Learn more about the school-based telehealth program. Schools interested in joining the program should contact Wells at navon@musc.edu.