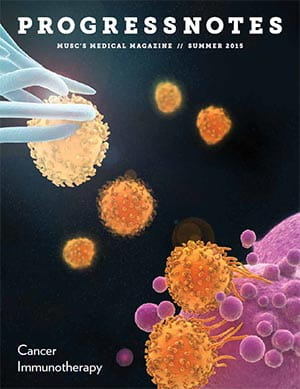 Not Playing It Safe

“There is no discovery without risk and what you risk reveals what you value.” —Jeanette Winterson, Written on the Body

When resources are tight, some prefer to play it safe. Karen Lackey, Director of the South Carolina Center for Therapeutic Discovery and Development (SCCTD), is not one of those people. “I can’t even watch the same movie twice,” she jokes.

Lackey, who led successful drug discovery efforts in the pharmaceutical industry for more than 25 years before joining MUSC, is on a mission. “The reason I am here is that I believe there is a better way to do drug discovery,” says Lackey.

She has seen hard times hit. She has watched as pharmaceutical companies laid off their research and development (R&D) staff—unable to support them when nine in ten compounds failed to show efficacy. She has seen the anxiety of academic researchers in the wake of restricted NIH funding. She turned a skeptical eye toward efforts by academic drug discovery centers to make themselves into “mini-pharmas” to meet industry’s R&D needs—only, like industry before them, to find the model unsustainable.

“We’ve done drug discovery the same way for 50 to 60 years and we’re stuck. It’s time to try something new,” says Lackey. “Separately, I don’t think either the pharmaceutical industry or the academic world has the answer. But if we could integrate the best of both those worlds and could change the 90 percent failure rate to 80 percent or 70 percent , that would be huge.”

The announcement in 2015 of two new MUSC/industry collaborations shows that Lackey’s innovative model is working. In late March, MUSC partnered with Aeterna Zentaris, receiving a 100,000-compound library valued at $5 to $15 million in return for using that library to identify new drug candidates in the company’s fields of specialty: oncology, women’s care, endocrinology, and neurology. In early May, MUSC partnered with Bristol-Myers Squibb (BMS) and will receive a multimillion dollar investment over three years to identify biomarkers and targets for fibrotic disease. “Our model is unproven, untested, and innovative, but now we have two deals and so clearly something we are doing is working,” says Lackey.

Why a New Model is Needed 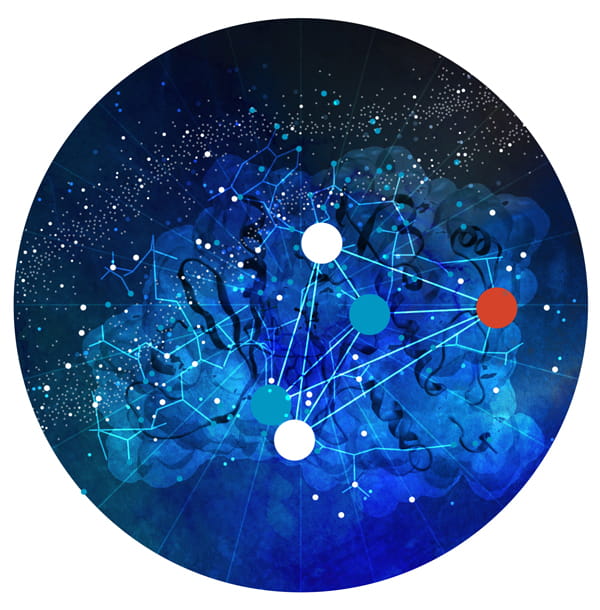 Simply put, the current models of drug discovery are not working.

“The industry model is extremely efficient,” says Lackey. “They have a lot of projects they can push through the system, but many go step by step through the efficient process and then fail.” A better success rate will require a more careful selection of targets and compounds. A deeper understanding of clinical pathology and biological mechanisms—something academic researchers can provide—will help identify promising candidates to take forward into development.

Academic drug discovery has been focused traditionally on the work of individual researchers who seek grants to fund their work in a particular field. If an investigator identifies a promising candidate, the institution files for a patent. In Lackey’s opinion, too much is staked on a single compound in this model, and creativity is prematurely shut down by the need to protect intellectual property. “After this initial disclosure, very little additional work gets done on the therapeutic agent," explains Lackey. "That’s why it keeps failing—it is almost like you are sending your baby out before it has been completely worked on.”

Why not let people do what they do best, and then form teams that capitalize upon their expertise? Physician team members could tap into their wealth of clinical experience and intimate knowledge of the pathology of a disease. Basic scientists could bring their deep understanding of a disease’s biology and the models they have developed to study it. “I wouldn’t run a drug discovery project without a basic scientist, a translational scientist, and a clinician,” says Lackey.

To encourage the creation of these teams, Lackey is developing a “virtual huddle” with support from an MUSC Strategic Planning Award. Intended to break down silos, the virtual huddle will enable clinical and basic science researchers across campus to access proposed drug discovery initiatives and, if they see a fit, to offer their own technologies to move the project forward. The projects that find the most support and collaboration and that form the strongest teams would then become part of MUSC’s portfolio of opportunities that can be offered to industry.

“This makes us look like teamwork people when we present to industry,” says Lackey, showcasing the close connection at MUSC between basic science research and clinical care that industry lacks and finds appealing.

A pharmaceutical partner brings a new piece to the puzzle—its expertise in taking a compound through all the testing that must be done to bring a compound to market. “Think about it. You take a pill, you swallow it, and you expect that pill to ignore everything else and go exactly where it needs to go and work its business and then get out cleanly without touching anything on its way out,” explains Lackey. “A lot of testing is involved to prove that, and that’s what industry can offer. But you really need that deep understanding of the pathology at each and every point and that’s what we bring.”

The agreement with Aeterna Zentaris offers MUSC investigators an invaluable asset—a large library of novel compounds that they can test for efficacy against identified targets. Most academic medical centers rely on the same commercial compound libraries, hampering drug discovery. “It’s like casting a net in the same pond for ten years and then expecting to find a new fish,” says SCCTD computational biologist Yuri Peterson, Ph.D.

Even more notable is the provenance of the compound library. In 2002, Aeterna acquired Germany-based Zentaris, itself a conglomeration of biotech startups, to do its R&D. “Medicinal chemists at those start-ups were synthesizing compounds directed at very important biologically active targets, and those are now part of the compound library,” says Lackey.

Lackey and Peterson are convinced that this novel and diverse compound collection will add momentum to drug discovery efforts at MUSC. “The Aeterna Zentaris discovery set is proprietary information built by their expert chemists, and now MUSC has exclusive access. This gives us a huge advantage in creating new drugs,” says Peterson.

In return, MUSC has agreed to provide the company at least one drug candidate per year beginning in 2018 in one of its specialty areas (i.e., oncology, women’s care, endocrinology, and neurology). The company can then decide whether to develop the candidate further; if not, MUSC can take the compound forward if it pays royalties. If an MUSC researcher identifies a drug candidate that is not in one of those four areas, MUSC can patent that compound and owe no royalties.

Planning a long-term partnership with MUSC, Aeterna Zentaris recently relocated its home office to Charleston, raising hopes that the city is on its way to becoming a biotech hub, like the Research Triangle in North Carolina. “This is something that Charleston as a community should be paying attention to, because MUSC has amazing opportunities in making an impact in patient care, whether in devices or in therapeutic agents,” says Lackey.

The goal of MUSC’s collaboration with BMS is to identify biomarkers and possible drug targets for fibrotic disease. Instead of betting its entire investment on a single target or even a single disease, BMS is funding basic and translational scientists and clinicians at MUSC studying three fibrotic diseases: scleroderma, idiopathic pulmonary fibrosis (IPF), and diabetic kidney disease (DKD), thus improving the odds that a druggable target will be identified.

Not only does the industry funding encourage a deeper exploration of fibrosis in each of the three chosen diseases, but it will help identify commonalities that characterize fibrosis across organ compartments and encourage the free flow of ideas among fibrosis researchers in different disciplines. “This collaboration among different fibrosis groups at MUSC and the infrastructure provided by the BMS partnership can be the basis for spin-off projects, such as program project grants,” explains pulmonologist Lynn M. Schnapp, M.D. MUSC investigators will also benefit from a close collaboration with BMS teams specializing in fibrosis, biomarkers, and immunology. The initiative will be governed by a joint steering committee that will help drive results by allocating more funds to the groups with the most promising findings. By casting a wider net, this drug discovery initiative will increase its chances of finding a promising target or compound.

The agreement offers Bristol-Myers Squibb something that Lackey thinks industry has been lacking—access to patients early in the drug development process. As a major referral site for scleroderma, IPF, and DKD, and as the highest-enrolling site of the trials that led to FDA approval of pirfenidone and nintedanib, the first drugs ever approved to treat IPF, MUSC can provide the company access to a large clinical population of fibrosis patients. Rheumatologists Richard M. Silver, M.D. and James C. Oates, M.D., pulmonologist Lynn M. Schnapp, M.D., and endocrinologist Maria F. Lopes-Virella, M.D., Ph.D., will collect samples from patients with scleroderma, IPF, and DKD, respectively. According to Silver, “These biological samples from well-defined patient populations will be used in novel explorative studies designed to identify and verify new targets to treat fibrosis.” In return, BMS will offer MUSC its platform technologies—for example, it can efficiently and inexpensively run the microarray analyses of the collected samples.

MUSC researchers also offer innovative models of fibrotic disease that can be used to test promising compounds—both animal models, such as the bleomycin mouse model of systemic sclerosis adapted by Stanley R. Hoffman, Ph.D., and humanized ones, such as the human skin organ model of fibrosis developed by Carol Feghali-Bostwick, Ph.D., that could be a better predictor of patient response. In addition, compounds can be tested in primary human fibroblasts collected and grown from patient specimens. These models enable BMS to select the best compounds to take forward into development —a compound showing efficacy across these models would be considered particularly promising. (For more on these models and on fibrosis research at MUSC, see “Fighting Fibrosis” in the Fall 2014 issue of Progressnotes.)

A Risk Worth Taking

Adhering to the status quo of drug discovery would almost surely deliver the same results—a 90 percent failure rate. Asking both academia and industry to adjust their mind sets, acknowledge their weaknesses, and combine their talents is risky, but it could improve the success rate of drug discovery and bring novel therapies to patients who desperately need them. That is a risk Lackey, MUSC, and an increasing number of pharmaceutical companies are willing to take.