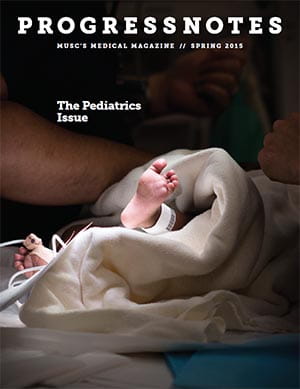 For the developing human being, the journey from conception to first breath under bright lights is full of risk. Being born prematurely (i.e., before 37 weeks gestation) is one of those risks. In South Carolina the prematurity rate is 13.8 percent, as compared to the national rate of 11.4 percent (2013). The state and the nation as a whole are striving to meet the March of Dimes’ 2020 goal of 9.6 percent.

MUSC Health is dedicated to reducing premature births and caring for critically ill newborns. As a state-designated Regional Perinatal Center (RPC) and an academic medical center, it offers comprehensive maternal and neonatal medical and surgical subspecialties.

Prematurity is the most common reason for a baby’s needing complex perinatal care, but any number of congenital problems, in utero injuries, or illnesses can deliver a baby to a neonatal intensive care unit (NICU). In South Carolina, NICU care is concentrated in seven level III centers, five of which are further designated as RPCs as regulated by the South Carolina Department of Health and Environmental Control (DHEC). Each RPC is responsible for managing the medical, transport, and educational needs of its region. MUSC Children’s Hospital, with an average of 900 NICU patients a year, is one of the largest of the RPCs. Collaboration among these five RPCs is critical to achieving good outcomes for all South Carolina babies, says David J. Annibale, M.D., Director of the Division of Neonatology and Director of the South Carolina Neonatal Medicine Consortium, an organization that works to improve the quality of neonatal care in the state. The partnerships are working. Infant mortality rates in South Carolina are improving more rapidly than in the rest of the country, says Annibale. South Carolina’s mortality data put the state in the second best quartile as measured by the Vermont Oxford Network, an organization of more than 500 private and academic NICUs around the world that share quality and outcome data.

“Because of DHEC’s strong regionalization system and the expertise that develops in large-volume perinatal centers, and because we can talk with one another and share approaches that work well or don’t, South Carolina is definitely reducing infant mortality,” says Annibale. Large-volume centers further reduce very low birth weight babies’ (VLBW, less than 1500 grams or 3 1/3 pounds, at birth) mortality. A neonate’s odds of dying can be as much as five times greater in a low-volume NICU.

Rita M. Ryan, M.D., Chair of the Department of Pediatrics, has been a clinical neonatologist for 25 years. “I am so proud of the officials who work for the state in Columbia who have supported perinatal regionalization, a concept strongly associated with improved survival in VLBW babies. They are doing the right thing for babies for the right reasons,” she says.

The South Carolina Neonatal Medicine Consortium began in 2003 through a collaborative effort between Greenville Health System (GHS) and MUSC Health. MUSC Health is represented by Annibale, (who leads the consortium), Julie Ross, M.D., and James Kiger, M.D., both Assistant Professors in the Division of Neonatology. Participants share information on quality improvement, data, and solutions. In this forum, MUSC Children’s Hospital has shared its pioneering successes in the following approaches: 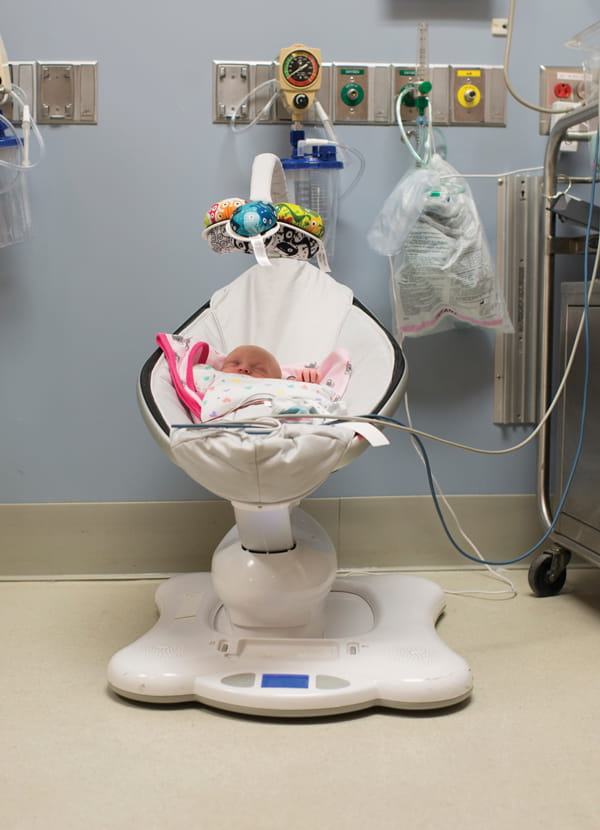 Nutrition is a major area of research in the Division of Neonatology. Two physician investigators and one Ph.D. are demonstrating just how critical nutrition is to growth and long-term outcomes. Bruce W. Hollis, Ph.D., Professor in the Department of Pediatrics, leads this team and focuses on the role of Vitamin D. Wagner conducts research on Vitamin D and breastfeeding.

Taylor is the lead researcher for preterm infant nutrition and growth. “The better you grow in the NICU the better your neurodevelopment at age two,” she says. Growing tiny premature babies outside of Mom is notoriously hard, but Taylor’s research has helped the NICU get to the point of being able to grow them efficiently. The goal is to enable the baby to leave the hospital at the same weight percentile as his birth weight percentile, which will keep him on his ideal growth curve. Otherwise, a gap in growth curves occurs, and the baby likely will not close it, leaving him at a later neurological disadvantage.

In the unit, therefore, the members of the clinical team—physicians, nurses, dieticians, pharmacists—recalibrate the nutrition every day. “Rather than saying a baby should get x number of calories per day to grow, we evaluate the baby’s growth and then determine whether we need to change the calories, the protein, the ratio of nutrients,” says Annibale.

“In the hospital, human milk is truly life-saving for premature infants,” Taylor explains. Out of the hospital, mother’s milk decreases re-hospitalizations, upper respiratory infections, and gastrointestinal illness in infants. Taylor is now studying how to help preterm babies breastfeed after discharge because other studies have shown that breastfeeding drops from 50 percent at discharge to 33 percent two to four weeks later to 8 percent six months later.

The consortium of NICUs began using early human milk nutrition several years ago. To meet the demand that resulted, Taylor suggested to the consortium that a South Carolina milk bank be established. By mid-2015, the state’s first and only milk bank will be housed at MUSC Children’s Hospital (see "A New Bank Just for Babies").

Other research includes the first U.S. clinical trial using hypothermia to protect the neonatal brain from lack-of-oxygen injury related to perinatal events that might affect oxygenation or blood flow to the fetus before or after birth. In the area of laboratory research, neonatal lung development investigators are looking at the effects of oxygen on lung inflammation, the role of lymphocytes in the lungs of premature infants on the ventilator, and novel ways to use surfactant beyond the first 48 hours of life.

Annibale gives the following example from being at the bedside of a particularly sick baby. “I had three NICU pediatric respiratory therapists with me brainstorming on what would be the best next move. You can’t do that in a center that takes care of five VLBW babies a year.”

“You can’t do that in a center that takes care of even 60 VLBW babies a year,” says John B. Cahill Jr., M.D., Associate Professor of Pediatrics and Medical Director of the MUSC Health Neonatal Intensive Care System. “You need to cross that 100-babies threshold to have the team skill set available to deliver the best care possible.”

But the team extends beyond the NICU, Annibale points out. A baby’s outcome also depends on the care delivered by high-risk maternal fetal medicine obstetricians. To provide those high-risk mothers with comprehensive assessment and interventions, MUSC Health is creating an Advanced Fetal Care Center, which is scheduled to open in a temporary space in 2015 (see "Great Expectations"). Also in the planning stages is a new hospital—the Children’s Hospital and Women’s Pavilion—which is projected to open in 2019.

“South Carolina has a reason to be truly proud of its neonatal outcomes,” says Annibale. The state’s strong system of regionalized centers, the collaboration among those who staff them, and the team approach overall that includes maternal fetal medicine specialists is moving the needle toward the goal everyone seeks: getting babies off to the best start in life possible.