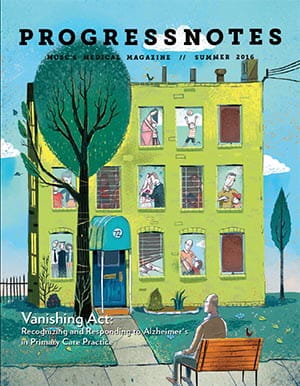 Windows to the Heart

For decades, physicians making decisions about how to treat coronary artery disease (CAD) have relied on cardiac angiography, which requires cardiac catheterization. In 2011, researchers at MUSC Health’s Heart and Vascular Center (HVC) reported that coronary computed tomographic angiography (CCTA), a powerful imaging test that provides detailed images of the heart and its blood vessels without the need for catheterization, provided as reliable a guide to decisions about revascularization as did conventional cardiac angiography, based on the findings of a prospective study comparing the two tests in 185 veterans with a high likelihood of CAD.1 The CCTA scans showed that 113 patients (61 percent) had no significant narrowing in the vessels and so did not need to undergo revascularization. Forty two (23 percent) had no coronary artery calcium at all.

“This highlights the clarity of what we’re seeing with CT, as opposed to tests that look at secondary markers of coronary artery disease,” said U. Joseph Schoepf, M.D., Professor in the Department of Radiology and Radiological Science and Director of the Division of Cardiovascular Imaging. “Only 40 percent of the patients had disease that required action.”

Today, the HVC produces some of the most revealing coronary CT images in the U.S., having been the first in the nation to take delivery in 2014 of the industry’s most advanced technology, the SOMATOM Force (Siemens Health care, Forchheim, Germany). This tool is producing more than 2,000 high-fidelity noninvasive imaging studies a year at the HVC, enabling dozens of research projects that are advancing understanding of CAD. For example, the Force’s improved temporal resolution enables radiologists to better freeze cardiac movement, providing clearer images of the heart muscle so they can quantify its thickness as part of their evaluation. Under Schoepf’s direction, the research team publishes 50 to 60 peer-reviewed journal articles a year. Its members include researchers from China, Korea, Germany, Lebanon, and Italy, among other countries, who have come to MUSC Health to gain skills in noninvasive cardiac imaging. Physicians from U.S. hospitals train with Schoepf as well. In 2008 Schoepf was named one of the most influential radiologists in the world by RT Image and in 2013 was selected as the Most Influential Radiology Researcher by Aunt.Minnie.com (a respected internet site for radiologists and related professionals in the medical imaging industry).

“We’re leaders in terms of how to apply these scans, how to interpret them, and how to make acquiring the image as gentle as possible,” said Schoepf. “We’ve made great leaps in reducing radiation dose, for example.” Patient safety is a significant advantage with the Force. The imaging dye load can be as low as 30 to 50 cc’s of contrast dye (older technology required 120 to 160 cc’s) and radiation dose is much lower—in some cases as low as that of a chest X-ray. 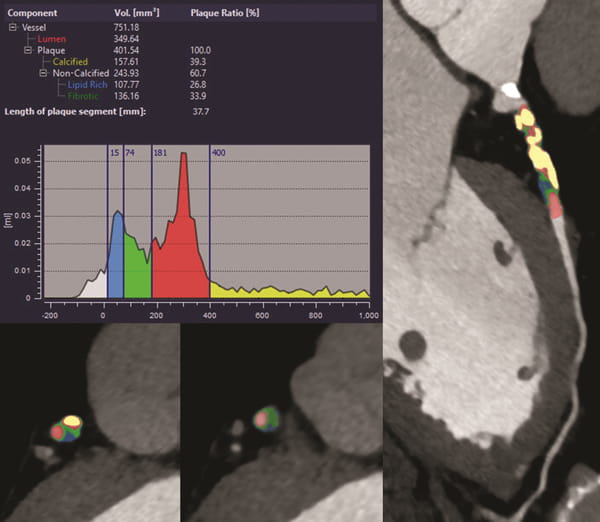 Quantitative imaging of coronary atherosclerotic plaque. Based on noninvasive CCTA, atherosclerotic plaques in the heart vessel are quantified according to plaque components. Stable calcified plaque components are segmented in yellow; more unstable non-calcified lesions, with greater risk of causing an acute cardiac event, are in blue and green, indicating more fibrous and fatty components

Visualizing disease directly as it manifests moves medicine closer to quantifying it.

“We’re truly seeing things in great detail, such as narrowing of the heart vessels, the makeup of atherosclerotic lesions, and whether they look stable or unstable,” said Schoepf. “We’re not looking at functional sequelae as we did in the past. We’re looking at the disease directly. We can put a number on things.”

Cardiologist Sheldon E. Litwin, M.D., a coinvestigator for several cardiovascular imaging studies, said the more quantitative data cardiologists have, the more precisely they can treat patients. “Cardiology has been under fire for putting in too many stents, in part because the tests we’ve used to decide who gets a stent are somewhat subjective,” said Litwin, Alicia Spaulding-Paolozzi Professor of Cardiac Imaging. “With CT, we can now derive quantitative estimates of blood flow and use these numbers to better decide which patients should receive stents.”

Blacks make up a third of the population of South Carolina and have a higher rate of heart disease than that of whites. Many of the HVC’s thousands of cardiac CT images are from black patients. So HVC researchers have taken advantage of that large dataset, the robust research team, the HVC’s image interpretation expertise, and the Force to elucidate heart disease in this group. They began in 2011 with a look at the offending atherosclerotic plaque in the heart vessels. Below is a summary of that study and three others that Schoepf identifies as the most significant in identifying racial disparities.

Coronary atherosclerosis in black and white patients. In a 2011 article in Radiology,2 MUSC investigators reported that atherosclerotic plaque burden and composition as measured by CCTA differ between black and white patients, with more unstable non-calcified disease in the former and more stable calcified disease in the latter. “That helps explain why we see a higher rate of heart disease in black people,” said Schoepf, “and why you don’t see it with less sophisticated tests such as coronary artery calcium scoring.”

Myocardial morphology and function in black and white patients. Analysis of CT scans of 300 patients showed larger myocardial mass in black patients, but no statistical differences in left ventricular (LV) functional parameters.3 This suggests that LV mass might be a contributing factor to the higher rate of cardiac events in blacks.

CT myocardial perfusion. In three clinical trials, HVC researchers are actively comparing CT myocardial perfusion (a test that shows how well blood flows through the heart muscle) to traditional perfusion testing methods. For example, they are looking at patient outcomes (what does the test tell clinicians about the patient’s prognosis), and the exact clinical scenario in which this test is most beneficial to the patient (a patient with acute chest pain vs. a patient with chronic chest pain who has a more intermediate risk of CAD).

CT FFR. Researchers are applying fluid dynamic models to the image of the coronary artery tree to determine which lesions are important and which are not and “teach” computers to recognize the difference. The computer then applies that knowledge in subsequent imaging. An article summarizing this work has been accepted for publication in the American Journal of Cardiology.

Researchers are learning more every day as the HVC scans more hearts, for if a patient has a heart attack later, they are able to look back to gain clues about his or her plaques. For example, they are finding that the degree of narrowing caused by plaque is not that important, but what the plaque is made up of is. If a lesion has a high content of soft plaque, it is much more likely to be unstable and eventually rupture, impairing blood flow to the heart.

As the data grow, the computers are “learning” how to characterize thousands of plaques even in one individual, a task too laborious for the human eye. “The notion is that at some point the computer will come up with images showing all of the plaques and tell us what they’re made up of, how many there are, how long they are, etc. Using this type of information, we’ll come closer to being able to predict who’s going to have a cardiac event,” said Litwin.

As CCTA evolves, the transformation of cardiovascular disease characterization will continue, delivering better ways to diagnose and treat CAD. “We believe there is benefit to visualizing coronary artery disease directly, rather than relying on an incomplete understanding of how risk factors and surrogate markers actually translate into atherosclerosis,” said Litwin. “That’s a superior approach.”