Brachytherapy, or “internal radiotherapy,” is the treatment of choice for women with locally advanced – International Federation of Gynecology and Obstetrics stage IB2 through IVA – cervical cancer because it is the only radiotherapy that delivers a high enough dose of radiation (Greater than 80 Gy) to effectively target the tumor with acceptable side effects.1 It is typically performed after about five weeks of external-beam radiation.

Radiotherapy is often preferred to surgery for these patients because the pelvic bones and nearby blood vessels make it difficult for surgeons to obtain an adequate negative margin (i.e., no cancer cells seen at outer edge of removed tissue). Unlike external-beam radiotherapy, which is typically used not only to shrink the tumor but to eliminate microscopic disease in the surrounding lymph nodes and other tissues, brachytherapy targets the tumor directly with much higher doses of radiation than could be delivered with external-beam radiotherapy.

Although low-dose-rate (LDR) brachytherapy has been standard of care for gynecologic cancers for many decades, HDR brachytherapy is growing in popularity because it has been shown to be as effective as LDR brachytherapy3 while offering a number of key advantages, including shorter treatment times, reduced radiation exposure for health care workers, and greater convenience and comfort for the patient.

In LDR brachytherapy, applicators and radiation sources remain within the patient for 48-72 hours, during which time the patient must remain confined to a hospital bed, with special precautions taken to protect family members and staff against the radiation implanted in the patient. In contrast, HDR brachytherapy typically requires four to five treatments over a one- to two-week period, with each visit lasting only a few hours and the treatment session requiring five to fifteen minutes. Applicators can be placed in the patient and removed after one or two treatment sessions, enabling the patient to return home and be with her family until time for the next treatment.

Precision counts, however, when it comes to HDR brachytherapy, because the radiation source used is “hotter” than that used in LDR brachytherapy and so the treatment must be planned with great care to ensure delivery of the correct radiation dose to the intended target.

Traditionally, brachytherapy plans were prescribed to standard points, but doing so could underestimate or overestimate the tumor size (Image above). Instead, image-guided brachytherapy prescribes the dose to the actual tumor volume seen on imaging.

Combined use of computed tomography (CT) and magnetic resonance imaging (MRI) yields the best results, as CT is useful for visualizing tissues and organs but can overestimate the size of the tumor, whereas MRI is the superior imaging tool for visualizing the tumor itself. In addition, a specialized hover bed, the Zephyr patient transfer system, is used to “hover” the patient between the operating room table as well as the CT and MR without having to lift her. This decreases the risk of applicator displacement and ensures treatment accuracy.

“MRI helps you see the tumor you are treating better so that you can be more confident and treat a smaller area, increase the dose to the tumor, and reduce the dose to surrounding tissues,” says Cooper.

Once the parameters of the tumor are known from the MRI, radiation sources can be introduced using special applicators and needles that enable Cooper and other radiation oncologists to “tailor” or “sculpt” the dose of the radiation to match the contours of the tumor (Image below). 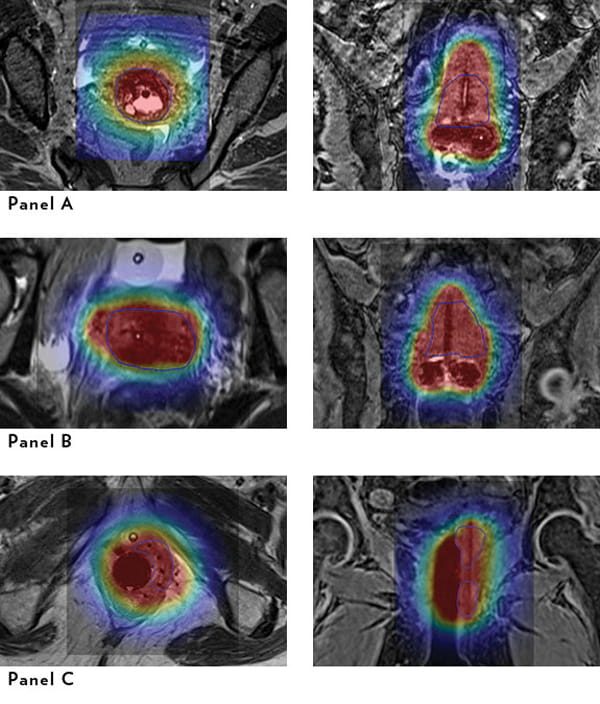 Axial T2 (left) and coronal T1 (right) slices of magnetic resonance planning images for high-dose-rate brachytherapy are provided for a single patient in each of the panels. The disease volume targeted for treatment is outlined in blue. For all images, the overlaid color wash represents the dose given during treatment, with the red area receiving the prescription dose.

Panel B. Tandem and ovoids plus five needles for locally advanced cervical cancer. The needles are used to extend the dose asymmetrically beyond the central tandem and custom shape the dose distribution to the target volume.

Even women who were once thought to be poor candidates for brachytherapy – such as those who have undergone hysterectomy – can benefit. Many of the traditional brachytherapy applicators (i.e., tandem and ovoids, tandem and ring) are placed in the uterus and so are not good options for women whose uterus has been removed. These women can, however, benefit from interstitial brachytherapy, which uses hollow tubes and needles as applicators. “We can do a complex multi-needle implant in these women,” says Cooper. Traditional applicators also do not work for women with bulky disease that extends down the vagina. However, they can still benefit from interstitial brachytherapy – needles are placed alongside the traditional applicators under ultrasound guidance in order to shape the radiation dose to match the tumor while minimizing exposure to surrounding organs.

Studies have shown that good local control can be achieved with image-guided HDR brachytherapy,4 though distant metastases continue to be a problem. A definitive answer about the efficacy of the technique and its effect on survival awaits the results of the European study on MRI-guided Brachytherapy (EMBRACE, NCT00920920) trial, which has completed accrual and awaits final results.

For more information about the program or to refer a patient, contact gynecologic cancer nurse navigator Angela M. Raney, RN, MSN at 843-792-9877 or raneya@musc.edu. 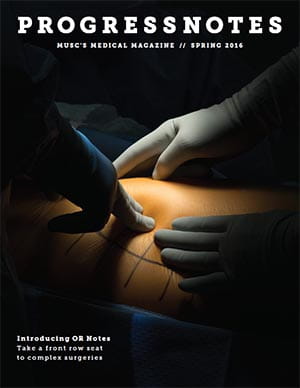