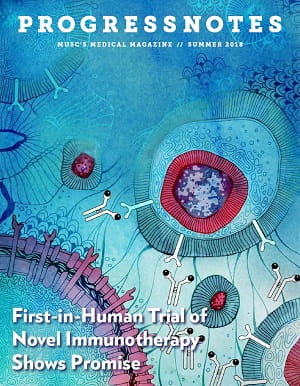 Healing a Hole in the Heart

One in four people is born with a small hole in the heart, such as a patent foramen ovale (PFO). For many, a PFO does not cause symptoms or disease; few people are even aware they have the condition. However, when a patient has a stroke for an unknown reason (i.e., cryptogenic), PFO is a likely contributor. It’s twice as prevalent in patients who experience a cryptogenic stroke.

Closing PFOs using a septal occluder reduced the risk of recurrent stroke in patients who had experienced a cryptogenic stroke, according to study findings reported in the September 14, 2017 issue of the New England Journal of Medicine (doi: 10.1056/NEJMoa1707404).

John F. Rhodes, M.D., a pediatric and adult congenital interventional cardiologist at MUSC Children’s Health, was one of the national principal investigators for the REDUCE study (NCT00738894), a multinational, multicenter study to lower the risk of recurrent stroke for patients who have previously experienced cryptogenic stroke. Participants in the study had no other probable reason for their stroke, aside from PFO.

The controlled, open-label REDUCE study compared antiplatelet therapy on its own with transcatheter closure of a PFO using a septal occluder (the GORE® CARDIOFORM Septal Occluder or its predecessor, the GORE® HELEX® Septal Occluder; W.L. Gore & Associates; Newark, DE), along with antiplatelet therapy. The research involved 644 patients ages 18 to 59; they will be followed for five years. Locations included 63 sites in the U.S., Denmark, Sweden, Norway, United Kingdom, Finland and Canada.

In the initial analysis published in the New England Journal of Medicine, the average risk of cryptogenic stroke decreased by 77 percent with use of a septal occluder compared to medical therapy alone.

“This is pretty compelling evidence that closure is the better treatment, especially in someone under 60 who has no indication for stroke, aside from a PFO,” says Rhodes.

Disclosure: The study was funded by W.L. Gore & Associates. As a national principal investigator, Rhodes was compensated for his time by the sponsor and serves as a paid consultant.

As many as 5.7 million Americans suffer from heart failure. In some cases, heart failure is due to an electrical problem that causes the ventricles of the heart not to contract.

“We can correct that in part by pacing both sides of the heart, which is called cardiac resynchronization therapy or CRT,” says MUSC Health cardiologist Michael R. Gold, M.D., Ph.D., a pioneer in the field of CRT. In traditional CRT, a pacing device about the size of a half dollar is implanted under the skin near the collar bone; it is attached to three leads that are usually placed in the top part or atrium of the heart, the right ventricle and the coronary sinus vein (to access the left ventricle of the heart).

Studies show that this therapy improves heart function, reduces hospitalizations and even prolongs life. But up to 30 percent of people do not respond to conventional CRT, in part due to failure to pace the best location on the left ventricle. Pacing from inside the left ventricle is thought to be better but has not been feasible because large leads increase the risk of blood clots that can cause stroke or heart attack.

A pivotal trial, SOLVE-CRT (NCT02922036), is testing the safety and efficacy of a new wireless implant (WiSE CRT System; EBR Systems, Sunnyvale, CA) that is no bigger than a grain of rice. Because the implant is so small—it has no batteries or computer—and because no leads are required, pacing from within the left ventricle of the heart is possible. Gold serves on the trial’s international steering committee. “It’s a very novel, creative approach, using ultrasound to avoid putting leads in a heart,” says Gold. Cardiologist John Lacy Sturdivant, M.D., who is leading the trial at MUSC, was the second surgeon in the U.S. to implant the device.

Getting into the Rhythm

MUSC Health has become the first hospital in South Carolina and the second in the U.S. to use a new, high-tech catheter called the HD Grid (Abbott; Chicago, IL) to give physicians more insight into the mechanisms of heart rhythm problems, such as ventricular tachycardia (VT).

In a person with VT, abnormal electrical signals cause the heart to beat more quickly than normal. It can run the gamut from mild, with no symptoms, to dangerous, causing the heart to stop.

“Previously understood mechanisms of arrhythmias may have oversimplified circuits of these fast heart beats,” explains Jeffrey R. Winterfield, M.D., director of the Ventricular Arrhythmia Service at MUSC Health. “Using this technology, we have gained a much richer and more detailed sense of how to localize circuits, which may result in shorter and safer procedures.”

So far, the MUSC Health team has used the technology on five patients. “The outcomes exceeded our expectations,” says Winterfield. “We shaved off two hours from procedure times for complex VT cases.”

The new catheter is similar to other high-density catheters but has an important difference. “It has multiple spines, each with four small electrodes evenly spaced from each other,” explains Winterfield. “These small and tightly spaced electrodes create a very small and sensitive antenna to detect abnormal electrical activity in scarred or diseased areas of the heart.”

Older catheters would be limited to just two electrodes that are larger and more widely spaced. “The result of the old arrangement would be that we would see only the larger signals and miss the rich and detailed circuits in the very diseased areas of the heart,” says Winterfield.