At the end of this article, the reader should be able to:

Water — mother and sustainer of life — can also destroy if not kept in check. A critical balance is needed to maintain homeostasis. In the human body, the kidneys and urinary tract perform this essential function by cleaning and filtering the blood, eliminating waste, maintaining the water volume and solute concentrations, and influencing blood pressure.

The physical plumbing system is deceptively simple: two filtration units are linked by ducts to a collecting reservoir that must be routinely emptied. Yet the intricacies of the developmental process require perfect coordination of tubule, duct, and bladder formation, not to mention the complex process of kidney development itself. The kidneys are the filtration units, and they contain millions of nephrons that cleanse the blood, reabsorb essential solutes and remove any remaining waste. Any hiccup during the developmental process can spell disaster for the filtration and fluid regulation system, but the system does include a few redundancies that make it resilient in the face of disruption, meaning that some anomalies can be benign, or at least may seem that way.

Hence the spectrum of congenital anomalies of the kidneys and urinary tract (CAKUT), which encompasses a wide variety of diseases that in many cases were previously considered individual entities. These disorders fall into three main classes: hydronephrosis, kidney malformations, and disorders involving renal migration or collecting system anomalies. The first class includes vesicoureteral reflux and obstruction of the ureteropelvic junction (the most commonly seen CAKUT, comprising about 20% of cases) or the lower urinary tract; malformations of the renal parenchyma can include kidney agenesis and kidney dysplasia; and problems of renal migration or collecting system formation can include ectopic kidneys, horseshoe kidney, posterior urethral valves, and duplications of ureters and/or kidneys.1,2

The overall burden of chronic kidney disease (CKD) is on the rise among both children and adults, and almost 50% of the pediatric CKD burden can be attributed to CAKUT. CAKUT can be confined to the affected structure and its functions or can be part of a multiorgan syndrome with far-reaching consequences. For example, VACTERL syndrome affects both renal and extrarenal systems in a predictable pattern of vertebral, anal, cardiovascular, tracheo-esophageal, renal, and limb defects. CAKUT may be an important cause of pediatric hypertension, and while supportive data are not yet available, it is certainly likely that a percentage of adults who develop essential hypertension have an underlying, potentially undiagnosed CAKUT. Most compellingly, decreased glomerular filtration rates (GFR) have been shown to correspond to reductions in the expected life span, mostly because of cardiovascular effects, but careful monitoring of GFR throughout childhood and adolescence can help with appropriate detection and treatment.1,3

Primary care providers may see and manage patients with various CAKUT manifestations without necessarily recognizing their place on the CAKUT spectrum. CAKUT can range from relatively benign and self-limiting anomalies to life-threatening disease requiring immediate intervention. It is crucial for awareness of the spectrum to increase among both pediatricians and doctors who treat adults, as even seemingly benign disease in childhood may progress to end-stage renal disease (ESRD) later in life and because CAKUT patients require lifelong care and monitoring.

CAKUT can occur at any time during fetal development, and the timing of developmental disturbance determines the exact physical and functional manifestations.

The structures comprising the urinary and reproductive systems arise from the intermediate mesoderm, one of the embryonic germ layers. Kidney development occurs in three stages, from anterior to posterior: pronephros, mesonephros and metanephros. The pronephros consists of tubules and a duct and is nonfunctional; it degenerates over time, but the caudal part of the duct remains and becomes the mesonephric duct, or Wolffian duct. The mesonephros consists of tubules and the mesonephric duct and is functional but temporary; mesonephric nephrons form but later degenerate as the metanephros takes over functionality. Outbranching from the mesonephric duct forms the ureteric bud, which grows into the metanephric mesenchyme and contributes to formation of the nephrons, renal pelvis, calyces, ureters and collecting tubules. The metanephric mesenchyme eventually differentiates into the functioning kidneys.1,4

The cells of the metanephric mesenchyme produce and secrete glial cell line-derived neurotrophic factor (GDNF). This chemical signal orchestrates the proper formation of nephrons via mesenchymal-to-epithelial transformation, regulated by numerous transcription factors and other molecules. The process is intricate and complex and is influenced by genetic as well as epigenetic factors.4

A wide variety of genetic studies have identified more than 50 single-gene disorders that can include CAKUT alone or as part of a syndrome. Some of these genes are part of the GDNF pathway, such as WT1, EYA1 and PAX2. Other well-known players include HNF1B, DSTYK and BMP4. PAX2 and HNF1B are known to explain a significant proportion of CAKUT cases and are thus used for diagnostic screening. Additionally, many patients with CAKUT carry copy number variations (CNVs) known to be associated with defined syndromes or that are extremely large or rare. However, only about 10% of CAKUT cases can be attributed to a known genetic disorder, and another 16% to CNVs. Thus, there is much room for progress in defining the genetic underpinnings of the remainder of cases and eventually mapping how genotypic architectures relate to prognosis, specifically the risk of renal failure for patients with CAKUT.5,6

While genetics certainly seems to play a role in CAKUT, epigenetic influences and environmental factors also have impacts. For example, high glucose levels due to maternal diabetes or stresses induced by maternal malnutrition, obesity, depression or other factors can influence the DNA and histone methylation patterns and other histone modifications during development, and the effects on gene silencing or expression can persist in the developing fetus. Exposure to teratogenic drugs, such as ACE inhibitors, can also disrupt normal kidney development.2,6 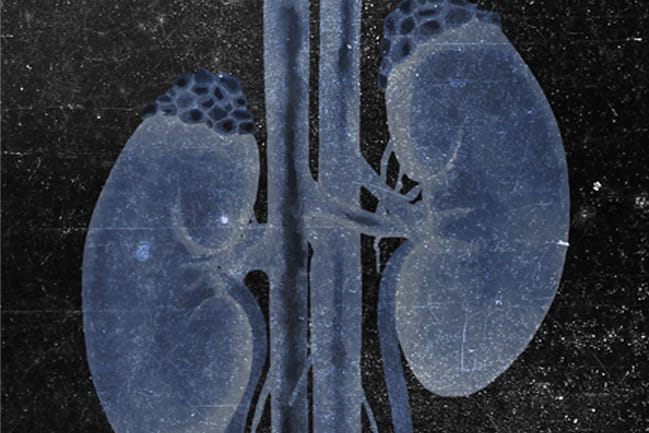 Most cases of CAKUT can be seen upon fetal ultrasonography of the kidney and urinary structures during pregnancy. Amniocentesis can also be performed where warranted to analyze the fetal urine as an indicator of fetal renal function. If prenatal detection does not occur, diagnosis in infants or children can be performed by blood testing, urinalysis, ultrasonography, voiding cystourethrography and CT or MRI scanning, particularly for children with frequent urinary tract infections.1,2

In recent years, advances in prenatal interventions have provided options that, while potentially subject to life-threatening complications, may be able to increase the chance of survival for fetuses with severe disorders. For example, vesicoamniotic shunting and fetal cystoscopy may be able to clear or circumnavigate obstructions in the urinary system, and amniotic fluid infusions can keep the fluid level optimal for proper lung development.

In newborns with CAKUT, surgery to remove obstructions can be performed in the hope of preserving the kidney function on the affected side. Even with any prenatal interventions and postnatal surgical treatment, the kidney function may be deficient or absent. Severe CAKUT can lead to ESRD during infancy, but even formerly mild cases may progress to ESRD by adolescence.

Renal replacement therapy is required to support patients with ESRD. Dialysis in infants is expensive and difficult, but it is generally agreed that transplantation is not an option until the child reaches a weight of 10 kg. Thus, dialysis and nutritional therapy often serve as a bridge until the child can receive a transplant. In a recent risk assessment of a large birth cohort, children who received transplantation preemptively, without prior dialysis, had higher survival and growth rates than those who received dialysis first. Conservative management via nutritional support and growth hormone supplementation may therefore provide the safest bridge to transplantation. Overall, transplantation is the most successful intervention for children with CAKUT who progress to ESRD.1,7

Primary care providers are the linchpins of successful patient management for those with CAKUT. Because of the spectrum of possible manifestations and the risk of less severe conditions developing later into high-risk ones, patients should be monitored carefully throughout life.

Cystatin C (CysC) is an important indicator of the GFR in adults and children and was recently studied as a marker of renal function in neonates as well, since the CysC level in neonates is not influenced by the maternal CysC level. In a prospective risk assessment study of infants with severe CAKUT, neonatal CysC levels of 3.0 mg/L or higher and nadir serum creatinine levels of 0.6 mg/dL or higher were the most significant predictors of early progression to CKD or ESRD. The presence of comorbidities and a gestational age of less than 36 weeks were also strong predictors of progression to advanced CKD.7,8

Renal disease in children with CAKUT can be progressive, so it is important to monitor GFR, CysC and serum creatinine throughout childhood. Decreases in life expectancy can begin when the GFR falls below 60 mL/min/1.73 m2. In addition, growth and physical development should be measured, as there is a relationship between CKD and growth stunting. CAKUT disorders often present in a bimodal pattern, so even those who remain relatively unscathed during infancy and early childhood must still be monitored for progression during adolescence by examining growth, renal, and cardiovascular markers. Moreover, holistic factors such as cognitive development and nutritional status should be assessed for satisfactory progress.7,8

Further studies to define which CAKUT cases evolve into CKD will help us to understand and develop different treatment modalities to help stop progression. Our ability to innovate the current treatment arsenal will benefit from standardized follow-up and measurement of GFR. This is especially important given the opportunity to avoid a reduction in life expectancy in this population.3,9

CAKUT is complex and multifaceted, and research into best practices for its management is still under way. The team at the Medical University of South Carolina (MUSC) has seen positive results by taking a holistic, collaborative approach to CAKUT and modeling care around the concept of a medical home, with nephrologists, transplant surgeons, developmental pediatricians, genetic experts, dietitians, social workers, nurses and others working together to treat and monitor each patient. Validated data from evidence-based studies are still required, but in many cases the progression of renal disease has been delayed or halted. The development of CAKUT centers devoted to these patients is a critical step toward efficient and comprehensive care that offers hope and the highest-quality lifestyle possible. In the meantime, primary care providers are charged with supporting and monitoring CAKUT patients and collaborating with proper specialists as required for each case. 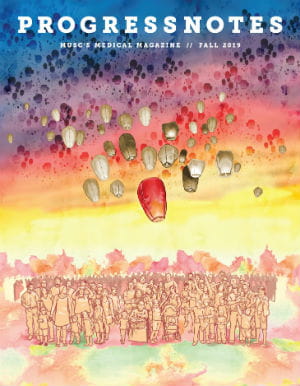 You can complete the steps necessary to receive your AMA PRA Category 1 Credit(s)™ by visiting MUSChealth.org/progressnotescme.

Disclosure Statement: In accordance with the ACCME Essentials and Standards, anyone involved in planning or presenting this educational activity is required to disclose any relevant financial relationships with commercial interests in the health care industry. Authors who incorporate information about off-label or investigational use of drugs or devices will be asked to disclose that information at the beginning of the article.

Dr. Shumyle Alam and Shawn Oberrath have no relevant financial relationships to disclose.