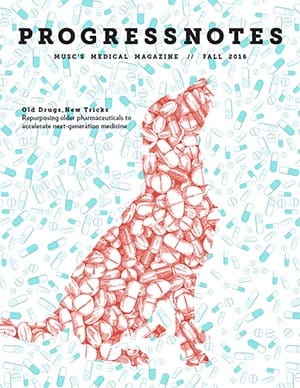 Laser with a View

The Heart and Vascular Center (HVC) at MUSC Health played a key role in a 2015 study (NCT01456000) that established the safety and efficacy of an endoscopic ablation system for treatment of paroxysmal atrial fibrillation (AF) that will soon be on the market.

The visually guided laser balloon (VGLB) system (HeartLight®; CardioFocus, Marlborough, MA) recently received premarket approval by the US Food and Drug Administration. The system is expected to be available at MUSC Health in late 2016.

Of the study’s 19 sites, the HVC was one of the two highest-enrolling (treating 55 of the 353 patients), and primary investigator Frank A. Cuoco, M.D., director of the HVC’s cardiac electrophysiology laboratory, treated the most patients as a single operator.

“This new laser balloon catheter is going to be another great tool in our arsenal for treatment of patients with symptomatic atrial fibrillation,” said Cuoco. “We showed that it has a lower injury rate and better long-term outcomes.”

The investigators reported their results in the Journal of the American College of Cardiology.1 The study compared the efficacy and safety of VGLB ablation vs. standard irrigated radiofrequency ablation (RFA) during catheter ablation of AF.

The VGLB system incorporates an endoscopic balloon catheter that uses a laser for the ablation. The physician moves the catheter to each of the four pulmonary veins (PVs) that create the irregular heartbeats that start and maintain AF. The goal is to heat the atrial tissue around the PVs to create a lesion that will block conduction of the erratic electrical signals. The compliant balloon catheter is inflated (creating contact with the atrial tissue), and the endoscope within enables the physician to see for the first time in this kind of procedure where he or she can ablate the heart tissue. The physician then directs the laser energy to ablate around the PV orifice. The endoscope enables him or her to ensure in real time that the lesions overlap for complete ablation around the PVs.

With earlier technologies, the physician worked within an electrical map of the heart and moved the catheter around this “shell” to mark where he or she thought the ablation had occurred. “But with the scope inside the catheter, it’s direct visualization,” said Cuoco. “This allows for efficient and complete ablation of the target tissue.”

In the clinical trial, the safety and efficacy of VGLB ablation proved noninferior to RFA. The mean procedure, ablation, and fluoroscopy times were longer with VGLB compared with RFA, but the primary adverse event rate was lower. Major complication rates were similar between treatment arms.

The patients who will be best served by this procedure will be those with AF who have experienced adverse effects from medication or for whom medications have been ineffective.

Other clinical trials on the horizon at MUSC Health include renal denervation and the use of ligation of the left atrial appendage to improve AF ablation outcomes. For more information, contact Dr. Cuoco at cuoco@musc.edu.