A significant minority (30 percent) of patients will either fail to respond or will have only a temporary or partial response when treated with antidepressants for depression. Some patients who have been treated with multiple antidepressants are still severely depressed. In such cases, “treatment-resistant” patients often receive Electroconvulsive Therapy, or ECT. While ECT can be highly effective, some patients suffer unwanted side effects, including memory loss or headaches. 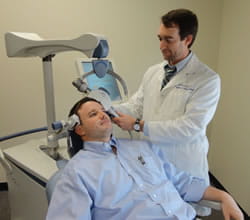 After 10 years of testing, the FDA approved a new technique for treating treatment-resistant patients in October 2008. Repetitive Transcranial Magnetic Stimulation, or rTMS, is a non-invasive procedure done in a doctor’s office. The results are similar to those of ECT, but rTMS has several advantages. First, the patient is not under anesthesia and can actually relax, read, or listen to music during the 30 to 45-minute procedure. A small curved device, about the size of a cupped hand, rests lightly on the patient's head, delivering focused magnetic stimulation directly to the area of the brain thought to be involved with regulating mood. The magnetic field pulses are the same strength as those used in magnetic resonance imaging (MRI) machines. Patients treated with rTMS have fewer side effects than those treated with ECT. The most common is scalp irritation from the pulses, which are similar to being tapped repeatedly.

In open-label clinical trials, one in two patients suffering with depression improved significantly, and one in three patients were completely free of depression symptoms after six weeks of treatment. rTMS therapy is proven safe and effective for the treatment of major depressive disorder in adult patients who have failed to achieve satisfactory improvement from one prior antidepressant medication at or above the minimal dose and duration in the current episode.