POEM is a fully endoscopic (by mouth) procedure used to cut the muscle in the esophagus wall, primarily to relax the lower esophageal sphincter so food can pass into the stomach.

“Generally speaking, we expect that around 90 percent of patients treated with POEM experience meaningful improvement in symptoms and quality of life,” says B. Joseph Elmunzer, M.D., the Peter Cotton Professor of Medicine and Endoscopic Innovation in MUSC’s Division of Gastroenterology and Hepatology. “The risks for POEM are low – between 3 and 5%, and there’s a lot of clinical research showing POEM is highly effective and safe.”

MUSC Health is the only center in South Carolina and one of only a few in the Southeast offering the procedure. It is also is one of the few centers with a physician – Robert Moran, M.D. – who is fellowship-trained in POEM.

Elmunzer, one of the nation’s earliest adopters of POEM when he began performing the procedure in 2013, says it offers certain advantages over the established treatments such as pneumatic dilation and the surgical Heller myotomy.

“POEM is minimally invasive and less dangerous than surgery,” he says. “It’s performed through the mouth, so there are no surgical incisions, but it still achieves a surgical style cutting of the muscle. For patients who are not an ideal surgical candidate be-cause they’re infirm or have multiple health problems, POEM is a good alternative. Emerging evidence also suggests that POEM may be the best treatment option for achalasia, even in surgically fit patients. The procedure takes from one hour to 90 minutes, so there is less physiological stress and fewer risks of complications such as infections, hernias and adhesions.” Unlike pneumatic dilation or surgery, POEM allows the physician leeway to tailor a myotomy to the patient’s needs.

The amount of muscle that can be cut with surgery or disrupted with pneumatic dilation is largely “fixed,” Elmunzer says. POEM is more adaptable and can treat other esophageal conditions, such as spastic disorders in the mid-esophagus and abnormal relaxation of the upper esophageal sphincter, which causes Zenker’s diverticulum.

POEM has been performed in toddlers as well as seniors in their 90s. The procedure typically requires an overnight hospital stay. One of its early adopters, Dr. Elmunzer takes a balanced approach to POEM. “It has proven its value enough so that it is always worth a discussion,” he says, “but my goal is to get as many patients as possible to us so we can discuss all treatment options available to them, including POEM. We have a nationally recognized esophageal disorders group that guides patients through decisions and provides the very best advanced care and treatment.” 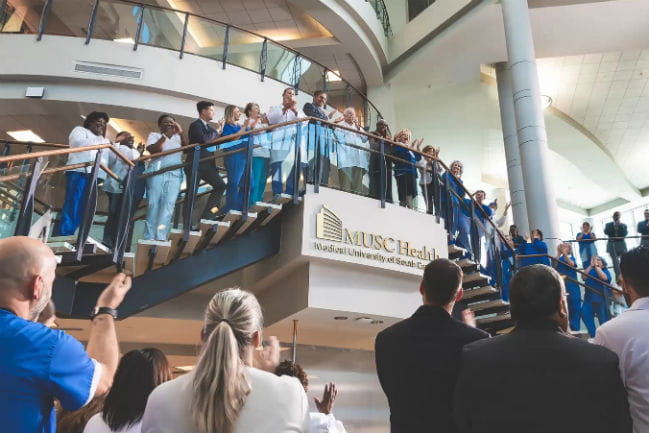 The Year in Review

The Year in Review

From the Upstate to the Lowcountry and beyond, our mission created a local, regional, national, and global impact in 2019.