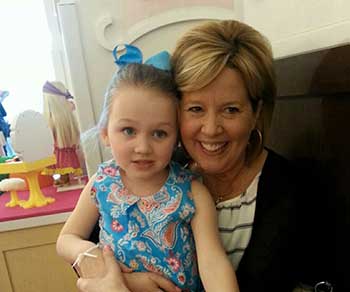 Special events planner Martha Michaud thought she could plan on at least one thing when it came to her health: She'd probably have to have a lot of biopsies, but never be diagnosed with breast cancer.

"I had a family history of dense breasts but no cancer. My mother had probably had 20 biopsies but no cancer. So I thought I’d live my whole life that way, and I’d probably get to the point where I’d say, 'No more biopsies.' Thank goodness, I didn’t."

In May of 2016, a mammogram showed a trouble spot. "Right away, the radiologist said, 'I’d be surprised if this is not cancer,' which was a huge shock to me. I didn’t anticipate hearing that," Michaud says.

"I sought out Hollings Cancer Center. I’m from Hilton Head. I don’t live in the area, but I really wanted to go to the best place I could find."

At Hollings, she met breast cancer surgeon Nancy DeMore and plastic surgeon Kevin Delaney. "Although I could have had a lumpectomy and radiation, I have six grandchildren," Michaud says. "I didn’t want to live in constant fear that I was going to have a recurrence, or that I would have to have a biopsy all the time, that my family and I would be on pins and needles. I just didn’t want to do that."

So Michaud decided to have a double mastectomy. Then she talked with Delaney about breast reconstruction. “He went over every single option there was,” Michaud said. “The time Dr. Delaney spent with me was amazing, on my first visit and the ones after that."

He told her about pre-pectoral breast reconstruction, a relatively new procedure that puts the implants over the chest muscle instead of under it. Delaney was among the first surgeons in South Carolina to offer it. He told Michaud the procedure can be much less painful than other types of reconstruction with a shorter recovery period and more natural looking results, and can be done immediately after a mastectomy if blood flow testing determines the woman is a good candidate.

"A lot of people don’t understand pre-pectoral reconstruction is even an option. I did a lot of research and checking," Michaud says. "I felt great about all of it. Dr. Delaney not promising me something he wasn’t 100 percent sure he could do for me was big. He’s honest, and that’s what I want," Michaud says.

When the time came, testing showed Michaud could safely have the pre-pectoral procedure. "I was able to keep all of my skin, both of my nipples and have my implants put in immediately after the mastectomy."

She had one complication afterward: a pocket of fluid called a seroma. "It's really common with breast surgery," she says. "That led to something I really love about Dr. Delaney. I’d been in, and he called the next day and said, 'I was thinking about your case last night.' And I love that - a doctor who really cares about you and thinks about the best ways to help you, even when he's not at work. So we did go back to the operating room to remove the seroma. He fixed it before it turned into a bad problem."

Today, about a year later, Michaud is complication- and cancer-free, and thrilled with how her body looks and feels. "Honestly, I look better now than when I started. That wasn’t the idea, but sure is a nice thing."