Cigarette smoke harms nearly every organ in your body and causes many diseases. Half of all smokers who continue to smoke will die from a smoking-related illness.

Leading Cause of Death
Smoking is the leading cause of preventable death in the United States. In fact, smoking is responsible for nearly 1 in 5 deaths (480,000) each year and more than 16 million people suffer from smoking-related illnesses in the U.S. alone.

Increased Health Risks
According to the CDC, smokers are more likely than nonsmokers to develop heart disease and stroke, and it is estimated to increase the risk of developing lung cancer in men by 25 times and in women by 25.7 times.

Cardiovascular Disease
Smokers are at a much greater risk for diseases that affect the heart and blood vessels and are twice as likely to die from heart attacks as non-smokers. Even occasional smokers of fewer than 5 cigarettes a day can have early signs of cardiovascular disease. Smoking also affects the blood vessel walls that carry blood to the brain, which can lead to strokes.

Cancer
Smoking is responsible for 90 percent of all lung cancer deaths in men and women. And more women will die this year from lung cancer than from breast cancer. Few people realize that smoking is also linked to many other kinds of cancer, including cancers of the mouth, nose, sinuses, lip, throat, esophagus, bladder, liver, kidney, pancreas, ovary, cervix, stomach, colon, and rectum.

Other Health Risks
Pregnancy and Fertility: Smoking can make it harder for women to become pregnant and can affect a baby’s health before and after birth. Smoking increases risks for early delivery, low birth weight, sudden infant death syndrome, ectopic pregnancy, and stillbirth. Smoking can also cause erectile dysfunction in men and damages sperm, making them less likely to fertilize eggs.

Diabetics: Smokers are 30 to 40 percent more likely to develop type 2 diabetes than nonsmokers. Smokers with diabetes are more likely to have trouble with insulin dosing, making it more difficult to control their disease. Additionally, diabetic smokers are at increased risk of developing nerve damage, heart and kidney disease, and eye disease.

Surgery Risks: Smokers who undergo surgery are more likely than nonsmokers to have complications or die after the procedure. In fact, the risk of death is 40 percent higher smokers. Cardiovascular complications increase 57 percent, heart attack 80 percent, and stroke 73 percent.

Secondhand smoke contains the same harmful chemicals that smokers inhale. It is known to cause cancer in non-smokers and is especially harmful to children who are more likely to have lung and ear infections, cough, wheeze, and have shortness of breath. It can cause asthma attacks and even premature death.

Secondhand smoke can also harm your pets. Your pets don't just inhale smoke; the smoke particles are also trapped in their fur and ingested when they groom themselves with their tongues. A study published in the American Journal of Epidemiology found that dogs in smoking households had a 60 percent greater risk of lung cancer; a different study showed that long-nosed dogs, such as collies or greyhounds, were twice as likely to develop nasal cancer if they lived with smokers.

Another vet study found that cats whose owners smoked were three times as likely to develop lymphoma, the most common feline cancer.

After nicotine enters the bloodstream it attaches to receptors where the neurotransmitter acetylcholine would normally dock. This starts a chain of chemical reactions that influence numerous bodily functions. For instance, it immediately releases adrenaline which stimulates the central nervous system and increases blood pressure, respiration, and heart rate. Dopamine, which affects the brain pathways that control reward and pleasure, is another neurotransmitter that is activated when nicotine reaches the brain.

For many tobacco users, long-term brain changes induced by continued nicotine exposure result in addiction. Addiction is characterized by compulsive drug seeking and abuse, even in the face of negative health consequences. Most smokers realize that tobacco use is harmful and express the desire to reduce or stop smoking. When a smoker tries to quit, he or she experiences withdrawal symptoms including irritability, difficulties sleeping, increased appetite, and strong cravings for tobacco products.

What's in a Cigarette?

There are over 600 ingredients in cigarettes. When burned, they create more than 7,000 chemical and at least 69 of those chemicals are known to cause cancer.

Many of the chemicals found in cigarettes also are found in consumer products. However, these products have warning labels. While the public is warned about the danger of the poisons in these products, there is no such warning for the chemicals in tobacco smoke. A pack-a-day smoker (20 cigarettes every day) will take in about 75,000 doses of these chemicals in one year. Here's a partial list of toxins in tobacco smoke and other places they can be found:

What Cigarette Manufacturers Will Not Tell You About Filters:

Tobacco industry documents show that they have known about filter fiber fallout since at least the 1950s. "Carbon particles were released from all cigarettes tested. In some studies, the particles released from cigarette filters were described as: "too numerous to count.""

Light cigarettes are NOT safer than smoking regular ones. Despite all the marketing hype with lighter colors used in the packaging and official looking statements about tar and nicotine levels, the truth is light and regular cigarettes are virtually identical.

The illusion of a light cigarette comes from nearly invisible vent holes that are drilled in the filter. These vent holes can actually make you inhale smoke deeper into your lungs. Additionally, light cigarettes have more chemical additives than “regular” filtered cigarettes. Cigarette makers often add extra chemicals to hide the harsh feel of the smoke. 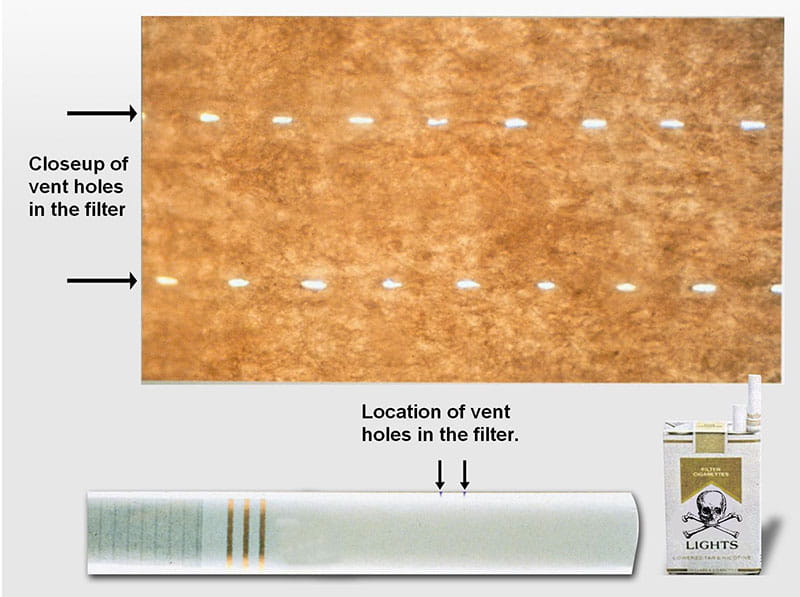 People who quit smoking greatly reduce their risk for disease and early death. Although the health benefits are greater for people at earlier ages, there are benefits at any age so you are never too old to quit.

US Surgeon General Reports identify both immediate and long-term effects of quitting smoking:

After Cancer Diagnosis
Quitting tobacco use immediately after being diagnosed with cancer gives a person the best chance for their cancer treatment to work effectively. When a person is diagnosed with cancer, their best chance for a cure is their first cancer treatment. If the cancer comes back, the chances of eliminating the cancer completely are reduced. Likewise, using tobacco can decrease the effectiveness of surgery, chemotherapy, and radiation therapy. Tobacco can decrease the response to cancer treatment, increase the risk of recurrence, and decrease survival.

Quitting tobacco use after cancer diagnosis will not only increase treatment effectiveness, but will also improve pulmonary function, cardiovascular function, and decrease the risk of developing other non-cancer-related diseases. In addition, people who quit smoking during chemotherapy or radiation therapy greatly decrease their risk of developing a second cancer several years later.