Allergies affect 20 percent of Americans. There is a genetic tendency toward the development of allergic disease and patients can develop allergies at any age. The symptoms of allergic rhinitis may mimic those of sinusitis or a viral respiratory tract infection (the common cold). The table below serves as a guideline to differentiate between the signs and symptoms of these common conditions.

Allergies occur when environmental triggers, such as pollens, mold spores, or animal dander, come into contact with the lining of the nose, eyes or throat. In certain patients, the immune system is hyperactive and produces an exuberant reaction that causes inflammation. Allergic patients often suffer from sneezing, itching/watery eyes, nasal stuffiness, and congestion. Less commonly symptoms may include scratchy sore throats, hoarseness, and cough. While allergies are rarely life threatening, they can lead to severe symptoms if secondary infections occur, and often lead to many days of missed work or school.

Many allergies are seasonal and vary depending upon the time of year. Ragweed (also called hayfever) is a major cause of allergies in the US and typically causes symptoms from late August until the first frost of the fall. Late springtime pollens often come from grasses, such as timothy, Bermuda, or some bluegrasses. Early springtime (late March or early April) pollens are more likely to be from trees, such as elm, oak, poplar, and walnut. Colorful, fragrant plants produce pollen that is too heavy to be carried in the wind and they rarely cause allergic reactions.

Other allergies are perennial and are present all year round. These include house dust, pet danders, foods, and molds. Symptoms may be worse in the winter because the house is closed up. Mold (or microscopic fungi) can grow in damp areas, both outdoors (around dead leaves or sheds/garages) and indoors (around house plants, bathrooms, or basements). Molds are most common in the warm, humid environment of the Southeastern US and are extremely light and easily carried on wind currents. 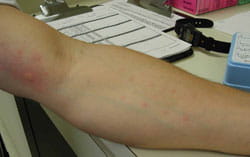