Last month we explained how we baby boomers are making the country a lot older, and this month we examine the health consequences of being older than 65 with special emphasis on the common chronic diseases associated with age. The major implication of healthy aging is that we live longer. That, of course, is a good and proper outcome. However, living longer means that we increase in age and unfortunately older age inevitably means we are going to be at increased risk for a number of chronic diseases. The U.S. Census Bureau compiles an enormous amount of data besides the number of people alive and they report some of it in a document entitled 65+ in the United States:2010 (PDF). There is a wealth of health information in this document and what follows relates to what I term the implications of older age found in the report. 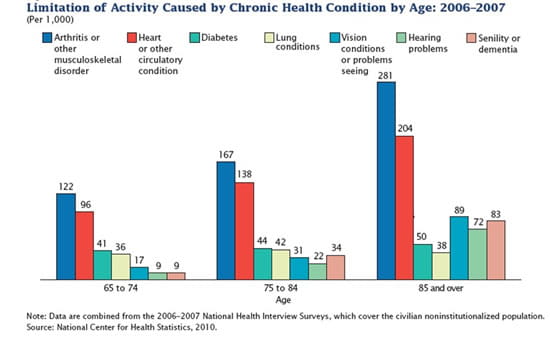 The figure above shows the most common diseases that limit activity as we age. These are the common chronic diseases and you see that arthritis is listed as the most common. It is a chronic disease that progresses with therapy, but can become debilitating without appropriate therapy. The prevalence of the disease is about 50 percent of people over 65, which is a very high number. Women have a higher incidence of the disease. If you are one of the many people with arthritis it is vital that you have it managed by a physician to prevent rapid progression of the disease.

Heart disease embodies a number of specific chronic conditions of the heart and circulatory system. The heart disease that is most prominent is coronary artery disease, sometimes referred to as ischemic heart disease, and is more common in men. It is a chronic disease secondary to the buildup of atherosclerotic plaques of cholesterol in the blood vessels of the heart that compromise blood flow to the heart. This is ironic since it is the heart that must pump blood to all tissues and when it does not get enough blood it puts all organs and life itself at risk. The same process of atherosclerosis also affects other blood vessels in the body jeopardizing the integrity of the vessels themselves and the organs they supply. Other heart diseases include the valves of the heart, primarily the aortic and mitral which may be either obstructed or incompetent with various processes related to the aging process. Altogether, it is reported that 96 per 1000 people have heart and cardiovascular disease that significantly impact their activity. This number increases with age so that 204 per 1000 are limited in those people 85 years and older and heart disease tends to afflict women and men about equally.

Stroke is the leading cause of severe long-term disability. It is much more likely in older Americans than younger: About 75 percent of strokes afflict people over 65 and the risks doubles every 10 years after age 55. The single greatest preventable risk factor is smoking.

Hypertension or elevated blood pressure increases as we age and if untreated leads to heart disease and stroke. It is often called the “silent killer” since there are few symptoms. It is very common affecting about half of the population over 65, and it is slightly more prevalent in women than men. It can and should be treated aggressively by a physician to prevent the other diseases that it is known to cause like heart disease and stroke.

Diabetes is a chronic disease of blood sugar regulation that is defined as type 1 (juvenile) or type 2 which occurs later in life. Type 2 afflicts the large majority of older people, but unlike most other diseases as we age its development becomes less common. In other words, diabetes is likely a chronic disease that develops before age 65, but does not disappear with age. It is very important to manage the disease well since it is a precursor to a number of serious diseases, most serious being ischemic heart disease and stroke.

Half of the people diagnosed with cancer are 65 or older. In other words it is very common and age is generally a risk factor for the diagnosis of cancer. The good news is that the most common cancers in the elderly, prostate and breast, now have 5-year survival of 90 percent. This is in stark contrast to lung cancer with the low survival rate of 16 percent. Screening is important in detection of cancer since most cancer survival is directly related to how early it is detected. Colonoscopy, mammograms, and prostate screens are among the known ways to detect cancer at an earlier stage for colon, breast, and prostate cancers, respectively.

Osteoporosis is a result of loss of bone density and makes bones more brittle and prone to fracture. Women are more prone to develop this disease in age than men. The bones most affected by the disease are spine, hip, and wrist. Hip fractures are common and lead to physical impairment in mobility. A frightening statistic is that older people who have a hip fracture are 4 times more likely to die in 3 months than those without this osteoporosis related event. Clearly treatment of osteoporosis is warranted and something everyone should discuss with their physician.

The two most common sensory losses are hearing and seeing. Both are important and if the loss is severe can lead to loss of activity. Hearing is more of a problem in men and advances with age, but as women age they tend to catch the men in hearing impairment. Visual impairment occurs more frequently in women but advances in both genders. When vision is severely impaired it can cause major limitations in activity.

Depression is the major mood disorder of the aging population. It is more common in women than men: the rate of diagnosed depression in women and men over 65 is reported to be 16 percent and 11 percent, respectively. This is a fairly high incidence in both genders and depression needs to be diagnosed and treated since it is associated with mortality from other causes than solely suicide. Depression should be discussed with one’s physician like any other symptom. There are many very good treatments for it.

It is good to age! That is the purpose of healthy aging. However, the consequence of getting on in age is that a great variety of health problems are going to occur and it is up to us to prevent those we can, detect those we cannot prevent, and with our doctor treat and manage the many chronic conditions that come with our superannuated time.