From time to time, we address most unpleasant topics in this forum. Pancreatic Cancer is one of these topics. There has been a modest increase in the incidence of this dreaded cancer such that nearly 50,000 Americans will be diagnosed with a cancer of the pancreas this year. Slightly more people are being diagnosed and slightly fewer are dying each year from it, but the 5 year survival after diagnosis is still only 8 percent which is scary bad.

What is Pancreatic Cancer?

The pancreas is a relatively small, but very important organ in the abdomen. It is only about 6 inches long and about 3 inches wide and relatively flat. It looks a bit like an island that has a narrow head and wide base. The organ lies behind the stomach and in front of the spine and has two major functions, both essential to health. The first is the exocrine cells, which excrete fluids that are essential for digestion in the small intestine. The endocrine cells of the pancreas make hormones, the most widely known being insulin that regulates blood sugar and whose production is required to avoid diabetes. Cancer can form in these cells and mainly in the exocrine cells. Like cancer everywhere in the body, the growth of cancer cells is not regulated and if not removed or killed will metastasize around the body and ultimately lead to death. The spread of the disease is characterized by various stages (0-IV). Stage 0 is carcinoma in situ and localized to one place in the pancreas whereas Stage IV is a wide spread of the disease to remote organs. Stages I through III are graded spread of the disease from local to body wide.

Why Is Pancreatic Cancer a Concern?

All cancers are important to detect and treat, and this is especially true of cancer of the pancreas. Even though it is relatively uncommon – it is the twelfth most common new cancer each year, but importantly it is the fourth most common cause of cancer death, trailing only lung, colon, and breast cancers. In other words, even though only 48,000 people a year will be diagnosed nearly that many (40,000) will die from it. Early detection gives the best hope of successful treatment.

The table below lists the factors that are associated with pancreatic cancer. Some are preventable like smoking and obesity, but others are not like age. Diabetes and chronic pancreatitis are diseases that seem to predispose to pancreatic cancer, so if one has either of these one should be especially vigilant for any of the symptoms discussed below. Likewise a family history of pancreatic cancer is a risk factor and requires constant surveillance. There are also a number of other hereditary conditions such as von Hippel-Lindau disease, Peutz-Jeghers syndrome, and breast and ovarian cancer syndrome among others, that are associated with cancer of the pancreas.

Risk Factors for the Development of Cancer of the Pancreas

The diagnosis of cancer of the pancreas is difficult and often late. The symptoms are not terribly specific and this is why the diagnosis is often at an advanced stage. Symptoms include jaundice (yellowing of skin and whites of the eyes), light-colored stools, dark urine, pain in the upper or middle abdomen and or back, unexplained weight loss, feeling tired, and poor appetite. With the exception of jaundice and color of stools and urine, none of these symptoms and signs are specific indicators that something is wrong, and even these are often late signs of disease (meaning by the time they occur the cancer is Stage I or greater.) There is one brand new, promising blood marker (GPC1) that may be helpful for detection. The definitive diagnosis requires confirmation by radiologic studies and or tissue biopsy of cancerous tissue. Sometimes a gastroenterologist will discover the disease with endoscopic techniques. Pancreatic cancer has a very high mortality and the later it is diagnosed (more advanced the stage) the poorer the survival.

Early detection is the best predicator of survival. The figure below shows that if the diagnosis and treatment is made when cancer is still localized to the pancreas that survival is much better than if it has spread to the regional lymph nodes or blood vessels and organs, or to distant organs such as the lungs. Treatment depends on the stage of the disease as well. Surgery is used for localized disease and in some cases of regional spread. Otherwise a variety of radiation and chemotherapy are used to contain the spread. If late in the disease a number of palliative procedures and treatments can be used, including pain therapies to block nerves that can make this a painful disease. All of the treatments require a team of physicians, nurses, and nutritionists to optimize the particular approach for each individual. There are National Cancer Institute center protocols available at the Hollings Cancer Center for investigational trials designed to try new approaches. There is one new drug (irinotecan) approved in October 2015 by the FDA to be used in patients with metastatic disease, and many other approaches are under study to improve the survival of this deadly disease.

Figure: Five-Year Survival Depending on Spread of Disease 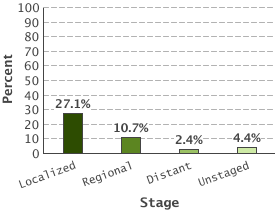 As we age there is an increased chance that we could be one of the 48 thousand people in the U.S. with newly detected pancreatic cancer. Avoiding smoking and maintaining normal weight are preventive measures to reduce risk. If one is in the high risk group, ask your physician about the new GPC1 blood test. As with all disease, being very aware of changes in normal activities, eating, and elimination are critical to early detection which in turn is key to survival.