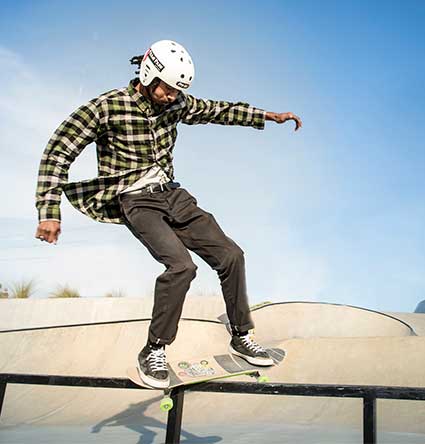 Aljoeson “AJ” Walker, II proudly boasts that he’s part of SK8 Charleston’s “original crew” – one of the first individuals to be employed at the popular skate park located on the Upper Peninsula.

AJ, a 23-year-old Charleston native, took up skating in his early teens and has been shredding the pavement ever since. That all changed in April 2017.

AJ was at the skate park with his friend when a trick ended with an off landing and a strong tweak to his knee.

“My foot was hanging off of my board and I landed really weird,” said AJ. “It happened when I dropped in on a steep bank on my cruiser board, and I needed to either ollie or bail when I reached the end of the platform.”

AJ’s split decision to kick away his board and bail was the moment his ACL tore completely and he realized he needed immediate medical attention.

His parents helped him research the team of MUSC physicians and after consideration, selected Dr. Woolf based on his area of specialty and reputation within the orthopaedic sports medicine community.

After meeting with AJ, Dr. Woolf confirmed that his best course of treatment was ACL surgery.

”AJ presented with an acute knee injury. He has quite a lot of pain and swelling, which is common with ACL tears, but can also reflect other injury patterns to the knee. He showed me a video of the errant landing and it was pretty obvious that he had probably injured ligaments in the knee. An examination in the office indicated the ACL and medial collateral ligament (MCL) were damaged and he probably had meniscal tears as well. An MRI later confirmed those injuries,” notes Dr. Woolf.

To help ensure a successful and potentially shorter recovery, AJ started physical therapy in the weeks leading up to his surgery in order to strengthen the muscles surrounding his ACL.

AJ’s ACL surgery included reconstruction of the ACL and also treatment of the medial and lateral meniscal tears.

The day immediately following surgery, AJ returned to physical therapy, focusing on electrical stimulation and working his knee. And over the course of the summer, his therapy included incorporating light skateboarding and basic board maneuvers into his treatment.

By the fall of 2017, AJ was again a regular skater at SK8 Charleston, relearning his old tricks and testing his skills.

“I’m not quite 100 percent just yet, but I am really close and will be there soon enough,” shared AJ. “I try to skate as much as possible between work and graduate school at MUSC. I appreciate having the ability to do what I can strength wise and capability wise.”

When asked about his overall experience with Dr. Woolf and his team, AJ was quick to respond.

“What I liked best about my MUSC experience was that they were very concerned with making sure that I had the most successful surgery and recovery as possible,” said AJ. “Not just recover, but get back to what I was doing before my injury.”

And for those considering treatment for a similar injury, AJ has some sound advice.

“If you’re passionate about whatever you do that may have caused your injury – or if you’re into anything that requires a lot of physical strength – you need to have the surgery. It’s a longevity thing. You don’t want arthritis or instability. And 20 to 30 years down the line, you’ll be so hurt you won’t be able to do basic functions. It’s just the smart thing to do.”

A big thank you to AJ for sharing his story and if you’re out at SK8 Charleston anytime soon, make sure to look for one of our favorite skaters catching some air or busting a trick.