An esophageal web is a thin bit of tissue that is similar to an "o" ring of a washer. These may occur at any level of the esophagus and typically cause difficulty swallowing. When these occur in the upper esophagus, they may be associated with other diseases such as iron deficiency anemia or graft versus host disease. Some authors believe that webs that arise in the mid to distal esophagus may be related to reflux. Rings differ from webs primarily by being thicker and involving more of the wall of the esophagus. 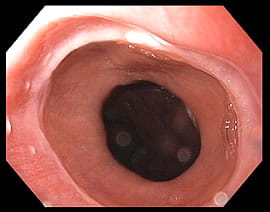 Rings and webs are best detected by barium studies although an upper endoscopy may also show these. Treatment of both rings and webs is by dilatation, usually performed with one large dilator. Afterwards, patients may be placed on anti-reflux medications to try to prevent recurrence.

X-rays are the best way to detect a diverticula. Complications of a Zenker's diverticula are inhalation with damage to the lung, forming a tract or fistula between the esophagus and the major airway, and a small potential for cancer. The mainstay of treatment is surgical excision although endoscopic treatment of "cutting the mouth" of the diverticula has been performed.