For more information about Whipple procedures at MUSC Health, call

What is a Whipple procedure?

After this is completed, the surgeon must reconstruct what remains: 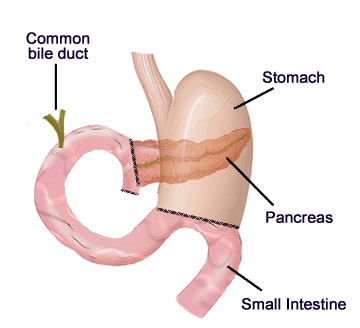 As you can probably imagine, this is a complex operation that may last many hours. It involves many critical organs that all need to work together.

Why is the Whipple procedure performed?

The Whipple procedure could be performed for any of the following reasons:

Malignancies in the pancreas, bile duct, or the duodenum, are frequently seen together. This is because they form a complex connection of ducts that send enzymes into the duodenum in order to completely digest food. The Whipple procedure takes into account the involvement of these organs, and the surgeon makes decisions based on the spread of the malignancy.

Complications of the Whipple procedure

Complications from this procedure may include:

Recovery from the Whipple Procedure

This is a complex operation that will require hospitalization for one to two weeks with the first post-surgery night spent in the intensive care unit before being transferred to the surgical floor. Patients usually remain fatigued for about two months after this operation. Follow-up with the surgeon normally occurs on a weekly basis. Radiation and chemotherapy are frequently administered in addition to any primary post-surgical care.

During this time you will be monitored carefully for any signs of complications. Your food intake will also be carefully controlled.

Things to expect post-surgery are:

You will not have anything to eat for the first few days so your reconstructed digestive system can heal.

Pain management will be effected through the use of a pain pump immediately after the operation, which will be replaced by pills when you have begun to consume solid food.

Going home after having the Whipple procedure

When you are finally released from the hospital, you will still have a lot of healing to do. In order to accomplish this, you will be given a strict set of instructions, some of which are:

You may have trouble sleeping, but that should become easier as you heal.

Learning to eat after your operation is about trial and error. You will eventually find a pattern and food that suits you. You may be given pancreatic enzyme replacements that you will need to take with food. Follow the instructions for this prescription carefully.

Any complications resulting from not following any of the above instructions will make your recovery time much longer.

Call your doctor if...

There are some signs that you should not ignore. Call your doctor if you experience any of these issues:

It will take some time to regain your old stamina. Don't get discouraged.