The pancreas and bile duct (biliary) systems together form an important part of the digestive system. The pancreas and liver produce juices (pancreatic juice and bile) which help in the process of digestion (i.e. the breakdown of foods into parts which can be absorbed easily and used by the body). 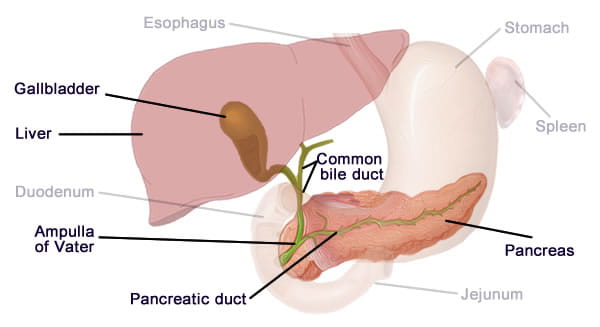 The biliary juices (bile) are made in the tissues of the liver (hepatic parenchyma), and then pass into the biliary ductal system (picture). Like a river, these ducts gradually join together to form one stream in the main bile duct, which exits (along with the pancreatic duct) into the duodenum at the "papilla of Vater." The gallbladder is a storage chamber for bile, joined to the side of the bile duct by another small tube – the cystic duct.

The anatomy (design) of the biliary and pancreatic ducts is not the same in every person. Variations can be important; some can cause medical problems, others may make treatment more difficult or complicated.

The main papilla of Vater is a small nipple-like structure on the wall of the duodenum, in its "second part." The duodenum is the upper part of the small intestine, into which food flows from the stomach. 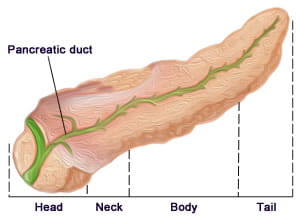 In most people there is a second smaller (minor, or accessory) papilla, situated about 2 cm (3/4 inch) above the main papilla, and slightly to its right. This is the exit hole for Santorini's duct. The minor papilla occasionally acts as a useful safety valve when the main papilla is not able to function correctly, but becomes the main site of drainage for pancreatic juices in the congenital variant called pancreas divisum.

The bile duct (biliary) system provides the channels through which bile is transported from the liver to the duodenum (through the papilla of Vater).

The liver is found in the right upper corner of the abdomen, immediately below the diaphragm. In health it weighs 3-4 pounds. It is divided into right and left lobes, and each of these have several segments. The bile ducts start as tiny tubes called sinusoids which lie between rows of liver cells called hepatocytes.

These liver cells make bile, and pass it into the tiny canals (cannaliculi). The small ducts join together like branches to form the main biliary tree, with one trunk which is formed just outside the surface of the liver. This is called the common hepatic duct.

The gallbladder is a collection sac for bile, which enters and leaves through a narrow tube called the cystic duct. The gallbladder is about the size of an egg when full. The bile duct below the cystic duct is usually called the common bile duct. The common bile duct and the common hepatic duct together constitute the main bile duct. The lower end of the bile duct sweeps around behind the duodenum and through the head of the pancreas before joining the pancreatic duct at the main papilla (of Vater).

There is a main pancreatic duct which collects juices from all the branches of the pancreatic stream, and exits at the main papilla of Vater. The pattern of these branches varies considerably, but this does not matter. However, there is often another important duct (named after Santorini) that connects the main pancreatic duct to another small papilla (the minor or accessory papilla) which is found about 2 cm (3/4 inch) above the main papilla of Vater in the duodenum. This (normal) arrangement comes about as a result of complex reorganization during fetal development. Early in the development of the embryo, the pancreas is in two parts (dorsal and ventral elements). These parts usually join together to form one pancreas between six and eight weeks of pregnancy. Even after joining, the santorini stays open or "patent," and drains into the minor papilla in over half of patients. Thus, the patient who develops a problem at the main papilla (like a stone or tumor) may not develop any symptoms of pancreatic obstruction if Santorini's duct and the minor papilla are open, and can take over the drainage function.

However, this fusion (joining) does not happen in about one in twelve people (at least in western populations). Then the pancreas remains divided (so called "pancreas divisum"). In patients with divisum, the largest (dorsal) part of the pancreas drains through Santorini's duct and the minor papilla, while only a small part (the ventral pancreas) drains through the usual (major) papilla. The importance of this is that the minor papilla may be too small to allow easy passage of the pancreatic juices; and some patients with pancreas divisum can develop attacks of pain and pancreatitis as a result due to this relative narrowing.

There are other rarer variations of pancreatic anatomy. Annular pancreas describes a congenital condition in which one of the branches of the pancreas swings all around the duodenum; this can narrow the duodenum sufficiently to cause obstruction and require operation. This condition usually presents in infancy (for obvious reasons), but can be discovered only later in life if the narrowing is not so tight, and sometimes when attacks of pancreatitis are associated with it. Other anomalies of pancreas development produce interesting pictures, but are not of clinical importance.

The tissues of the pancreas (acinar cells) produce a clear digestive fluid made up of bicarbonate, and enzymes. Bicarbonate is alkaline, and helps digestion by neutralizing the stomach acid containing the food as it passes into the duodenum. The enzymes are more important. These are designed to help breakdown (digest) complex carbohydrates (sugars), proteins, and fats in the food. The main enzymes are called amylase, proteases (trypsin, chymotrypsin), and lipase. The enzyme and bicarbonate secretions together are called the "exocrine" function of the pancreas.

The bile ducts function as a drainage system for the liver. Bile is a bitter dark fluid, composed of bile acids, bile pigments, bilirubin, cholesterol and other fats, water and electrolytes. Some of these constituents are useful for digestion, others are simply waste products (i.e. cholesterol).

The gallbladder acts to store bile, and make it more concentrated by removing water. Although thin, the gallbladder wall has muscle tissue, so that it can contract and empty when necessary.

Production of the bile and pancreas juices and their release into the duodenum through the papilla of Vater are controlled by abdominal nerves and also specific messengers (hormones) which pass to their targets through the bloodstream. These systems also control contractions of the gallbladder, and relaxation of the sphincter of Oddi (the muscular valve within the papilla of Vater). Together these insure that the juices are produced and released into the duodenum only when they are needed, that is when food arrives from the stomach ready for final digestion, and subsequent absorption.

The pancreas also has an "endocrine" function – the production of insulin and other important hormones. These are produced in separate tissues within the pancreas (islets of Langerhans), and passed directly into the blood stream (rather than into the pancreatic duct). Insulin is very important for control of sugar levels in the blood; lack of insulin results in diabetes. The pancreas produces many other enzymes (such as somatostatin, pancreatic polypeptide, glucagon, etc.), the functions of which are of less immediate importance. Glucagon helps counteract insulin and helps prevent hypoglycemia, a common problem after extensive/total pancreas surgery.

Pancreatic juices may not reach the duodenum if the duct or papilla is blocked, or if the pancreas is so damaged by disease that it cannot produce adequate bicarbonate and enzymes. Lack of pancreatic juices results in inadequate digestion. Clinically this is noteworthy by the passage of large bowel movements, which a strong odor and are difficult to flush down the toilet because of their high content of fat. Indeed, sometimes patients with pancreatic insufficiency may note an "oil slick" on the toilet water. Excessive fat in the stools is called "steatorrhea." Because food is not absorbed properly patients usually lose weight.

These pancreatic enzymes can be replaced, at least to a certain extent, by giving them in the form of a medicine by mouth – so called pancreatic enzyme supplements. It is not usually necessary to replace the missing bicarbonate output.

Lack of bile also interferes with digestion (particularly of fats) and can also result in steatorrhea. Lack of bile in the duodenum is usually due to blockage of the main bile duct, or papilla. The liver continues to produce bile, which then spills backwards into the blood stream. Eventually this causes yellow discoloration of the body (jaundice), first noticeable in the whites of the eyes. If bile does not enter the duodenum, bowel movements lose their usual color, and look like pale putty. When the bile ducts are blocked, retention of bile salts in the blood can result also in considerable itching (pruritus). Blockage of the bile ducts or pancreatic ducts can cause pain due to overdistention.

Lack of insulin secretion by the pancreas results in diabetes. It is also possible to have too much insulin when the islets of Langerhans overact, or become tumorous. This results in the blood sugar falling below normal levels, resulting in faintness and eventually coma. Lack or excess of other pancreatic hormones (such as somatostatin, vasoinhibitory peptide, glucagon, etc.) can cause unusual symptoms very rarely.