Gastroenteritis is an inflammation of the gastrointestinal tract in both the stomach and the small intestine. The most common form of gastroenteritis is viral. You have probably heard of viral gastroenteritis referred to as a stomach flu. While this may not seem like a serious condition, the number of cases worldwide each year may be as high as five million, resulting in over one million deaths. Over half of those deaths are children.

Many different viruses can cause gastroenteritis, but the most common viruses are rotavirus and norovirus.

This virus commonly affects infants and young children, who then spread the infection to other children and adults. Usually spread orally, rotavirus symptoms typically appear within one or two days of infection. This virus is usually most active between the months of December and June.

This type of virus can affect people of any age and is highly contagious. Most active between the months of November and April, the norovirus is spread through contaminated surfaces, water or food, as well as other infected individuals. It is also most commonly spread within crowded spaces such as daycares, schools, nursing homes, etc.

A healthy person can overcome the symptoms of gastroenteritis; however, children, the elderly, and people with compromised immune systems can get seriously ill.

Symptoms of gastroenteritis may include:

Sometimes a person can run a low-grade fever along with the above symptoms. In severe cases delirium may result. Symptoms of gastroenteritis can last for a few days, or longer if the person has a severe case.

Gastroenteritis often shares common symptoms with other medical conditions that need to be ruled out for a correct diagnosis.

Some of these other conditions may include:

Besides viral, there are two other variations of gastroenteritis: bacterial and parasitic.

Bacterial gastroenteritis, often referred to as "food poisoning", is the result of bacteria having caused an infection in the stomach and/or intestines. This usually results in these organs becoming inflamed along with unpleasant symptoms such as vomiting, severe abdominal cramps and diarrhea. Although viruses cause most infections of the gastrointestinal system, bacterial infections are also quite common. Bacterial gastroenteritis tends to develop as the result of poor hygiene. You can get it after close contact with animals, but will more likely be acquired from consuming food or water that has been contaminated with bacteria (or the toxic substances they produce).

A parasitic infection is an infectious disease caused or transmitted by a foreign organism that has invaded the body. In the case of parasitic gastroenteritis, the two most common causes are from Giardia and Cryptosporidium.

The Giardia parasite is usually found in soil, food, or water that has been contaminated with feces (poop) from infected animals or humans. With the Cryptosporidium parasite, water (recreational and drinking) is the most common method of transmission. In fact, Cryptosporidium is one of the most frequent causes of waterborne disease among humans in the United States.

Both of these parasites are protected by an outer shell that allows it to survive outside the body for long periods of time. 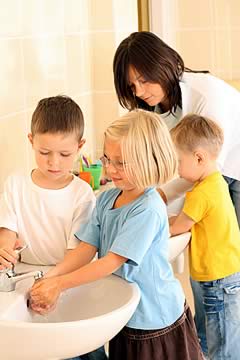 It is important to understand that gastroenteritis causes the body to lose fluids. This is referred to as dehydration. People with severe bouts of gastroenteritis can dehydrate very quickly and become critically ill. This is especially important in small children who can lose a large percentage of the water in their bodies very rapidly.

Consuming water may not always solve this problem, and intravenous fluids may be required. Electrolytes, a major force in controlling fluid balance within the body, may also be needed if the person has lost too much fluid too quickly.

Dehydration is a serious condition that can result in death. Immediate medical attention is warranted if gastroenteritis persists and the individual continues to experience symptoms.