Gastritis is a term commonly used by the public (and sometimes by doctors) to describe episodes of stomach discomfort (usually after eating) sometimes associated with nausea and/or vomiting. We refer also to “upset stomach” or “indigestion”. 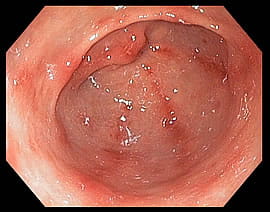 However, strictly speaking, gastritis is a formal medical term for a diagnosis made by a pathologist when evidence of inflammation and damage to the stomach lining is seen in a biopsy specimen taken during an upper endoscopy. And it may sound odd to say, but in the true use of the term, "gastritis" —at least the chronic type (see below)— usually does not cause episodes of indigestion.

There are two types of gastritis, acute and chronic.

What is Acute Gastritis?

Acute gastritis refers to a sudden onset of inflammation of the stomach lining, called the gastric mucosa. When a gastroenterologist performs an endoscopy, the lining appears reddened, and specimens show lots of acute inflammatory cells (mainly white blood cells, called leucocytes). There may be small, shallow breaks in the surface lining, called acute erosions ("erosive gastritis"), and even tiny areas of bleeding.

What is Chronic Gastritis?

Chronic gastritis refers to a persistent, but low grade, inflammation and damage to the stomach lining. The gastric mucosa becomes thinner as the normal cells are destroyed. The inflammatory cells include lymphocytes, which indicate an immune response. This is very common, especially in less developed countries. When present for many years, the mucosal changes may progress to a stage called metaplasia, with a small increased risk of gastric cancer.

Acute gastritis is caused by acute irritants that overwhelm the mucus lining that usually protects the stomach mucosa. Irritants include aspirin or other NSAIDs (non-steroidal anti-inflammatory drugs), poisons (including strong alcohol) and certain infections, including the early stages of infection with the bacterium helicobacter pylori. Usually, the inflammation settles quickly when the irritant is removed.

What is Helicobacter Pylori?

Helicobacter pylori (or H. pylori) is one of many bacteria that is commonly found inside the stomach. In fact, it is suggested that more than half the world's population has this bacteria, yet never experience any problems. However, an H. pylori infection can increase the risks of developing stomach cancer, gastritis and/or peptic ulcers.

Chronic gastritis usually results from infection with helicobacter pylori (or H. pylori). In the United States, H. pylori infection is present in about 20% of Caucasians, but in over 50% of Hispanics, African Americans, and the elderly. The infection rate of adults in underdeveloped countries may be as high as 90%.

Other causes of chronic gastritis may include:

What are the symptoms of gastritis?

Acute gastritis usually does cause an acute upset stomach, with upper abdominal pain or discomfort as the body tries to get rid of the irritant.

Other symptoms can include:

In the vast majority of cases, chronic gastritis causes no symptoms. When the damage to the mucosa is severe and long standing, the stomach loses its ability to produce acid. This may cause digestive upsets.

Also lost is the ability to secrete a substance called intrinsic factor, which is necessary for absorption of the important vitamin, B12. Deficiency of vitamin B12 eventually leads to a condition called pernicious anemia. The patient presents with:

The diagnosis is easily confirmed by blood tests.

How is gastritis diagnosed?

When acute gastritis symptoms are bad enough to warrant contacting a doctor, a diagnosis is usually able to be made based simply on the story. However, a direct look at the stomach lining via an upper endoscopy examination —also known as an EGD (or EsophagoGastroDuodenoscopy)— may be necessary when the problem persists, or bleeding occurs. The inflammatory changes are usually confined to the stomach rather than the first part of the small intestine, referred to as the duodenum. Other tests, such as blood tests, X-rays and scans are usually not necessary for diagnosis unless an alternative condition is suspected during investigation.

Chronic gastritis is diagnosed by examining a specimen (biopsy) of the stomach mucosa. This is typically taken during an upper endoscopy examination. Additional blood tests and tests for Helicobacter pylori may be required

How is gastritis treated?

The most important part of acute gastritis treatment obviously is to remove the irritant when found. Simple antacid medicines, more powerful "H2 antagonists" (such as Tagamet© or Zantac©), or a "Proton pump inhibitor" (such as Nexium©) are helpful for reducing the amount of acid in the stomach. Anti-nausea medications may be needed.

Consultation with a physician for further investigations and more sophisticated treatments will be necessary if symptoms do not settle quickly, or if any vomit contains blood. When H. pylori infection is diagnosed, treatment involves antibiotics, often in combination for up to two weeks. Most cases settle quickly unless the irritant or infection is not removed.

Eliminating any causative infection (usually H. pylori) with antibiotics is important to prevent progression of the chronic gastritis, but the stomach mucosa rarely returns to normal. Vitamin B12 deficiency is treated by intermittent injections.

Patients with severe changes to the mucosa (i.e. pre-cancerous changes in the cell lining of the stomach) may need an upper endoscopy every year or so to detect and treat lesions which can develop into cancer.