Celiac disease (sometimes referred to as celiac sprue, non-tropical sprue, or gluten-induced enteropathy) is essentially a sensitivity to gluten which is a component of wheat. Patients with celiac disease who ingest any wheat products develop abnormalities in the lining of the small intestine, particularly the upper part (jejunum). The incidence of celiac disease is unknown as there are many individuals who have "silent" disease and have not been diagnosed. Individuals at high risk are those with ancestors from north western Europe and individuals with insulin dependent diabetes (the latter association being genetically related). 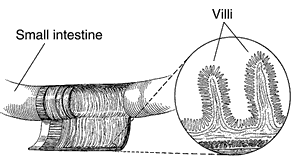 Wheat, rye, barley and oats contain the proteins that make up gluten and will all affect patients with celiac disease. It is believed that there is an immunological response to components of gluten which result in inflammation of the lining of the small intestine which is characterized by flattening of the finger-like projections (villi). The mucosa can become so damaged that it can become "leaky"; water and salts can leak out of the cells into the small intestine and be lost with diarrhea.

Patients classically have symptoms and signs of malabsorption (i.e. diarrhea, nutrient deficiencies, iron deficiency, folic acid deficiency, anemia). They may experience weight loss, gastric distension, features of other associated disorders such as diabetes, dermatitis herpetiformis (a particular type of skin disorder), and bone pain from osteoporosis/osteomalacia. However, some patients may not have any symptoms. Celiac disease may be suspected by family history and routine blood tests.

Anemia is probably one of the most common findings. Blood tests are available (antigliadin and antiendomysial antibodies). The antiendomysial antibody test is the most specific. The ideal way to confirm celiac disease is to perform an upper endoscopy and to inspect and take samples from (biopsy) the small intestine. On inspection the lining of the small intestine appears atrophic and has a "cracked earth" appearance. The degree of microscopic damage varies from mild inflammation to complete blunting or atrophy of the villi.

The treatment of celiac disease is to remove all gluten from the diet. Even small amounts of gluten can prevent a clinical response. It is important for the patient to become very familiar with gluten free products. Information is available in celiac disease support groups as well as on the Internet. Some patients may not respond to a gluten free diet and need other treatment, such as steroids. Failure to respond to a gluten free diet and/or steroids should always raise the suspicion of another diagnosis.

Patients on gluten free diets should have supplements of vitamins, particularly vitamin D, folic acid, and iron. These may need to be given by injection if they cannot be absorbed in the oral form.

Rarely, patients with celiac disease have developed tumors of the esophagus and small intestine. Patients may also develop multiple ulcers in the small intestine with stricturing and intestinal obstruction. Celiac disease is also sometimes associated with a microscopic inflammation of the colon (microscopic colitis) which can also contribute to diarrhea.