For more information about SOD treatment at MUSC HEalth, call

The sphincter of Oddi is the muscular valve surrounding the exit of the bile duct and pancreatic duct into the duodenum. The sphincter is normally closed, opening only in response to a meal so that digestive juices can enter the duodenum and mix with food for digestion. 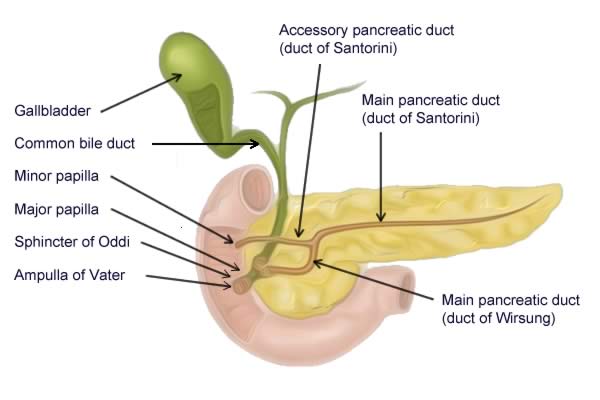 The mechanism of sphincter of Oddi dysfunction is not completely known but, in theory, when an individual has SOD, his/her sphincter goes into "spasm", causing temporary back-up of biliary and pancreatic juices, resulting in attacks of abdominal pain.

Two conditions that can affect the sphincter of Oddi are papillary stenosis and biliary dyskinesia.

Papillary stenosis is a condition that occurs when this sphincter (opening) mechanism is disturbed. When the hole is too tight, there is a backup of bile and pancreatic juices which can result in abdominal pain and/or jaundice. Also, blockage to the pancreatic orifice can cause pancreatic pain or attacks of pancreatitis.

Biliary dyskinesia is a gallbladder dysfunction where the biliary ducts fail to contract properly and/or a reduction in the speed of emptying of the biliary tree occurs. Often a symptom rather than a disease itself, biliary dyskinesia might signal the existence of other digestive disorders such as acute pancreatitis, chronic pancreatitis, chronic inflammation, or gallstones.

Pain symptoms resulting from either gallstones or bile duct stones are quite similar to those caused by sphincter of Oddi dysfunction. In fact, patients who have previously undergone a cholecystectomy (removal of the gallbladder) are more likely to become afflicted by SOD than those whom have not.

SOD may be one manifestation of other muscular spasm problems in different areas of the body such as the esophagus or colon. However, in some patients, it is the prevailing complaint, and requires immediate attention.

Sphincter dysfunction is usually only considered in patients with severe attacks of pain persisting or recurring after gall bladder surgery (cholecystectomy), and in whom standard tests show no evidence for structural causes, such as a small tumor, or perhaps a stone.

The suspicion that the sphincter may be overactive and causing pain is greater if the scans and/or blood tests show some evidence of obstruction to the bile duct. Indeed, SOD is divided into two types.

Type I consists of patients with troublesome biliary-type pain, a bile duct greater than 9mm in diameter, and elevated liver tests. Type II patients have a dilated duct or liver test abnormalities, but not both. There used to be a Type III —patients with pain but none of those findings— but a recent study (EPISOD) showed that such patients do not respond to cutting the sphincter.

Type I and II patients are usually advised to undergo ERCP, with or without measurement of the sphincter pressures, by sphincter of Oddi Manometry (SOM), and are often treated by cutting the sphincter (sphincterotomy).

The prior type III patients (with "pain only") should not be offered ERCP, except perhaps in a research study with fully informed consent.

For ERCP (and while the patient is under sedation or anesthesia), a doctor passes a special flexible endoscope down the throat and into the duodenum. The purpose of this procedure is to examine the drainage hole of the bile duct at the papilla of Vater. Locating the sphincter of Oddi is often difficult, as it may be tightly closed, and sits in the folds of the duodenum. Once it is located, dye may be injected into the bile duct and pancreatic duct to double-check for stones and other forms of obstruction.

The possibility of sphincter spasm (dysfunction) is tested during the ERCP by measuring the "squeeze pressure" in the sphincter. Like all types of ERCP examination, there are risks; particularly the chance of suffering an attack of pancreatitis. For this reason, ERCP in this context is usually done only after other simpler tests have been exhausted.

Sphincter of Oddi dysfunction is a difficult condition which should be approached and managed with considerable care. Patients may warrant referral to specialist centers whom often have special research protocols.