Located in the upper, right-hand portion of the abdomen up under the rib cage, the liver is the second-largest organ in the body. A very complex and dynamic organ, the liver manages clotting factors in the blood, cleanses the blood of toxins, controls numerous enzymes and proteins, controls cholesterol levels, and produces bile to aid in the digestion of food. 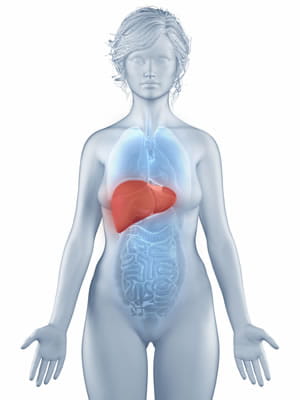 Unlike most organs, the liver can regenerate lost tissue, and this fact has had an enormous impact on the field of liver transplantation.

The liver was once thought of as one of the most important organs in the body, along with the heart and brain. It was thought to control a person's emotions, and to be called 'pigeon-livered' was to imply you were a meek and spineless person. A large liver endowed a person with courage and daring.

Liver damage can be caused by many factors. Alcohol and some drugs are toxic to the liver, but damage can also occur because of infections, and even exposure to some types of shellfish. When the liver is damaged, the body is unable to perform these vital functions. People with liver disorders experience fatigue and nausea.

Perhaps the most often-heard statement in drug advertisements is, "Do not take this if you have liver problems." All drugs are filtered through the liver, and this can have adverse effects on the treatment of patients with liver damage.