What is lactose intolerance?

Lactose is a special type of sugar which occurs in dairy products (ex. milk, butter, yoghurt, cheese, etc.). To be absorbed by the body, the lactose needs to be split into its two component sugars, glucose and galactose. This digestion is brought about by lactase enzymes which lie in the microvilli—microscopic, finger-like projections—of the lining of the small intestine. An enzyme is a substance produced by a living organism that acts as a catalyst to bring about a specific biochemical reaction. 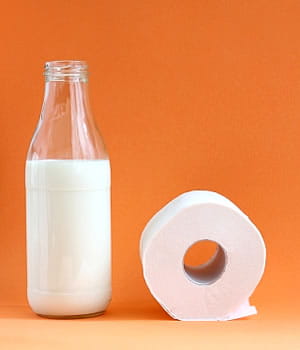 When there is a deficiency of this lactase enzyme, lactose cannot be broken down. Resulting diarrhea is caused by fluid entering into the small intestine, but also due to lactose passing to the colon where it is broken down by bacteria to organic acids and fermented. A significant amount of water can be lost into the intestine following the ingestion of a large lactose load.

Some individuals can develop secondary lactose intolerance. This occurs when the intestinal mucosa is injured such as in celiac disease, Crohn's disease or even infections. The inflammation damages the cells that produce lactase.

Lactose intolerance is probably one of the most common genetic deficiencies occurring in 5–10% of Caucasians of northwestern European ancestry, but in greater than 90% of people of African, Chinese or Mediterranean background. However, it is not always clinically significant as this depends on the amount of lactose that is ingested.

What are the symptoms of lactose intolerance?

The classic clinical features of lactase deficiency are:

Many patients are labeled with the diagnosis of irritable bowel syndrome (IBS) before lactase deficiency is considered. Occasionally, patients may develop osteoporosis as they avoid all milk products and become calcium and vitamin D deficient.

An informal diagnosis of lactose intolerance can be made by asking the patient to avoid all milk products. Alleviation of symptoms can occur in a few days on a modified dairy free diet.

A more formal way of diagnosing lactose intolerance is to perform a specialized breath test. During this test the patient ingests radioactively labeled lactose and is then asked to breathe into a bag which measures labeled hydrogen and methane (produced by the breakdown of lactose by colonic bacteria). If the patient is truly lactose intolerant they may develop significant symptoms during this test.

Another way for assessing for lactase deficiency is to perform a blood test after lactose ingestion to measure blood sugar levels, which should rise if it is being digested and absorbed normally.

Treatment includes restriction of dietary lactose, prevention of dietary deficiencies (particularly calcium and vitamin D), and use of lactase preparations which can be taken whenever a small amount of dairy product is eaten.